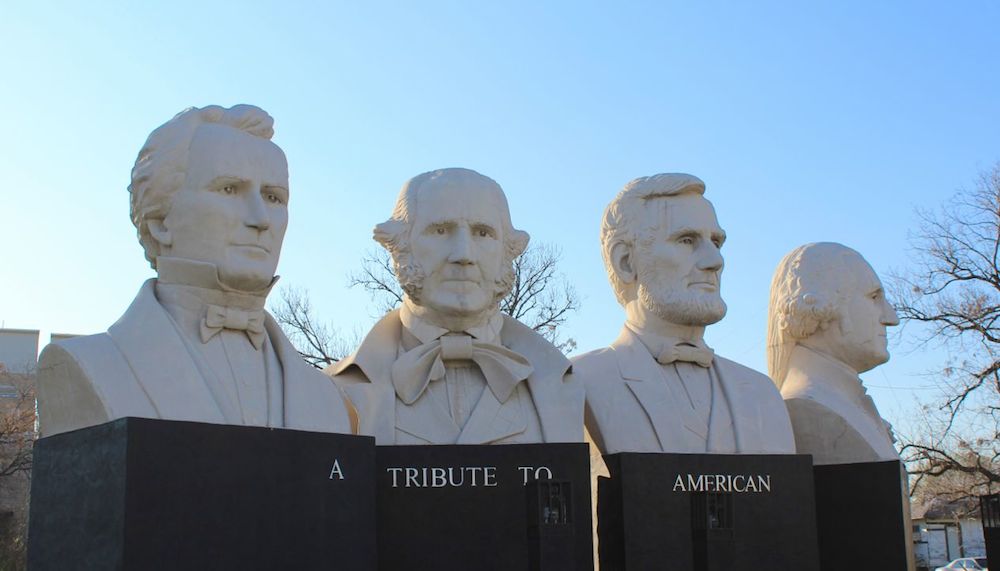 Take a closer look at Mount Rush Hour, formally named American Statesmanship Park, overlooking the I-10 and I-45 interchange in the Sixth Ward.

Each 18-foot tall concrete bust sits upon a six-foot black block, which collectively have the words “A Tribute to American Statemanship” emblazoned across them.

The small one-third acre lot is the site of a former church which was damaged beyond repair in a 2001 flood. The church’s foundation, including some concrete stairs, are all that remain. Adickes later bought the lot and then had Mount Rush Hour installed in January 2008. In 2012, Quinita and Christopher LaPorte bought the lot and art installation from Adickes and donated it to Harris County, which then included it in its park system and gave it the formal name American Statemanship Park. Adickes had coined the original Mount Rush Hour as a nod to its location and the national Mount Rushmore monument in South Dakota.

Even though millions of people see Mount Rush Hour each week from the passing highways, few folks actually visit the tiny First Ward park itself or know exactly how to reach it. That’s largely by design, as visitors to the site will discover there’s not much there aside from a photo opportunity. The grounds surrounding the lot are uneven and there are footpaths through the trees that are used by some of Houston’s homeless population.

Getting to the park is pretty simple. Take Edwards Street east from Houston Avenue. After a few blocks, Edwards curves around and becomes Elder Street. The First Ward neighborhood is rapidly gentrifying with new three-story town homes going up amid the small old bungalows, some in very dilapidated condition. The park has no formal parking spots, but visitors can park along the side of Elder Road.