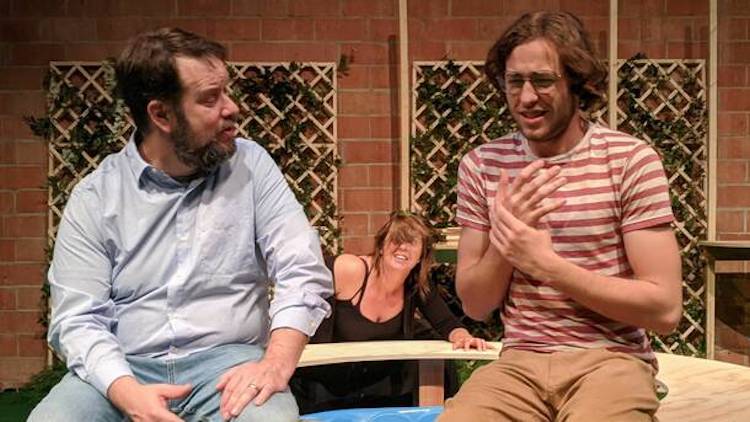 Cone Man Running Productions presents Alan Ayckbourn’s Garden at Studio 101 in Silver Street Studios. The play is interconnected with Ayckbourn’s House, which CMRP performs nearby at the same time with the same actors playing the same characters.

A garden festival turns chaotic when a woman scorned is driven to hiding in bushes and assuming her husband and son are clones. Maypoles, Morris dancing, a broken fountain and a fortune teller’s tent add to the insanity causing the unraveling of all kinds of relationships—spouses, friends, lovers.

When the rain threatens the event, a farce unfolds, forcing everyone to face the repercussions of their sexual decisions.

This is a linked play with House—both shows are performed at the same time and the 14 characters cross back and forth between the two stages. Skillfully written, the two plays can be seen in any order and at the same time. They also work independently as hilarious stand-alone plays.

House is performed in the adjacent Studio 233 at Silver Street Studios.

Tickets are $30; $25 for ages 65 and older and for groups of eight or more people; $15 for students with valid I.D., but limited discounted $15 tickets are available to all ages for select shows.

Tickets for both shows are $50; $40 for ages 65 and older; $25 for students with valid I.D. Discounted $15 tickets for House are also available for select shows.

Click here to check for discounted tickets for Garden.

Click here to check for discounted tickets for House.​