Skate Then Sip at The Ice at Discovery Green 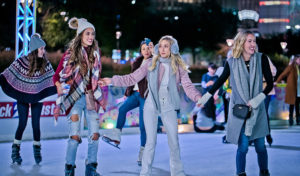 Theatre Under the Stars (TUTS) presents the holiday crowd-pleasing musical Elf: The Musical at the Hobby Center. The modern day Christmas classic returns to Houston in an all-new production. Based on the cherished 2003 movie starring Will Ferrell, Elf: The Musical, tells the story of Buddy, a human accidentally transported to the North Pole as a

Fully Committed at the Alley Theatre

The one-man comedy, Fully Committed, explores the harried life of Sam, who works the reservation’s line at one New York’s hottest restaurants. With all the chaos from demanding socialites and wannabes, not to mention his overly demanding boss, will he manage to make it home for the holidays? Admission Tickets start at $47. Click here

A.D. Players present a stage version of the classic film at the George Theater in Uptown. At Christmastime in 1947 New York, an old man named Kris Kringle turns up at the famed Macy’s department store and gets a job as Santa Claus. When word gets out he thinks he’s the real Kris Kringle, he’s