Ingrid x Brian Micheal Cox at Collect It For The Culture 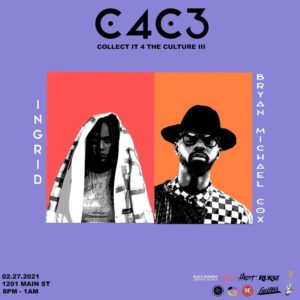 The pop-up Collect It For The Culture exhibition at GreenStreet in Downtown hosts an exclusive performance by Bryan Michael Cox and recording artist Ingrid. There will be tunes from Everlasting Vibes. Bryan-Michael Cox is an American record producer and songwriter who is notable for his extensive work with multiple platinum-selling artists including Usher, Mariah Carey, Mary […]

The Riot Comedy Show welcomes Alvin Newsome for a socially distanced comedy show in Rudyard’s legendary comedy room. Originally from Memphis, Tennessee, Newsome has been entertaining audiences with relatable topics like marriage, parenthood, getting older, and the dredges of corporate America. His style is meant to be enjoyable to all backgrounds & has garnered him opportunities […]

The Riot Comedy Show: Comics You Should Know at Rudyard’s British Pub

The Riot Comedy Show hosts a stand-up comedy showcase featuring some of Houston's funniest up-and-coming homegrown comedians in Rudyard’s legendary comedy room. Get to know some of the funniest comedians coming up in the Houston Scene—Tre Tutson, Katie Miller, Jamal Rahal, and Patrick Eady. The show will also introduce Tess Vergult and visiting Austinite, Colton Dowling. […]