For 2020, the 39-year old Houston Ballet Nutcracker Market has moved online to a virtual marketplace featuring holiday and other goods from hundreds of merchants from around the country. Proceeds all go to support the Houston Ballet Foundation and to help it bring arts education, scholarships, performances, and classes to hundreds of thousands of Houston-area […] 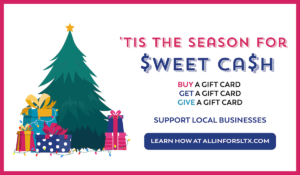 Get gift cards and pass it on to essential workers with ‘Tis the Season for Sweet Cash when you buy a gift card from a Sugar Land local business, while supplies last. This year has been tough on many of our favorite local restaurants, retailers, and service shops. These small businesses have faced unprecedented economic […]

An event every week that begins at 10:00 am on Friday and Saturday, repeating until Sunday, January 3, 2021 1940 Air Terminal Museum presents Space Age Christmas Trees: World’s Biggest Mega-Show, a special edition of its annual display for the 2020 holiday season, featuring more than 100 vintage aluminum Christmas trees from all of the major manufacturers. Curated by the authors of The Evergleam Book, the temporary exhibit showcases so many gleaming and glimmering vintage aluminum […]

Elf Movie Screening at The Drive-In at Sawyer Yards

Rooftop Cinema Club hosts a screening of the hilarious holiday movie starring Will Ferrell, Elf (2003), at The Drive-In at Sawyer Yards. When young Buddy falls into Santa’s gift sack on Christmas Eve, he’s transported back to the North Pole and raised as a toy-making elf by Santa’s helpers. But as he grows into adulthood, […]

An event every week that begins at 8:00 pm on Sunday, Thursday, Friday and Saturday, repeating until Saturday, December 12, 2020