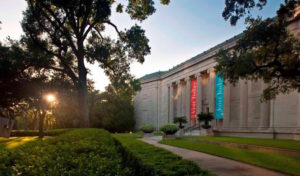 Greater Houston boasts some of the finest, and some of the quirkiest, museums and art installations in the nation. And many of them play host to curated and traveling showcases of art, history, science, and ingenuity—including many kid-friendly options. Click here to view our full and detailed list of temporary exhibits and installations currently on

Spring Break at The Woodlands Resort Families and friends are welcome to the two-week long Spring Break at The Woodlands Resort. Located just 30 minutes from downtown Houston and an hour from Sugarland, the family-friendly resort destination offers a new lineup of engaging activities and special entertainment to ensure an unmatched Texan getaway. Daily activities include lounging at the lazy river

Spring Break at The Westin in The Woodlands 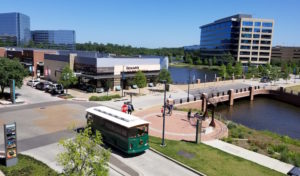 If you're looking for an adventurous Spring Break close to home, look no further than The Westin in The Woodlands. Overlooking the beautiful Woodlands Waterway with a scenic rooftop pool, you’ll be just steps away from Swan Boat rides and kayak rentals at Riva Row. Enjoy wonderful Italian cuisine onsite at Sorriso Modern Italian Kitchen,

One of the premier motorsports events of the year, TX2K brings together souped-up domestic, sports, and rare vehicles from around the country for a week of roll racing, drag racing, and car show exhibition at Houston Raceway Park. Times vary per day. Click here to view the schedule. Admission Tickets for single-day admission start at

Out of an abundance of caution surrounding the Coronavirus, this event has been canceled. Explore the Rodeo grounds filled with carnival rides, a midway, prize-winning animals, performances, and more. In the evenings, you can catch cowboys and cowgirls battle duke it out in series of rodeo competitions, plus the crowd favorite mutton bustin‘. 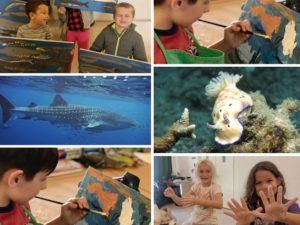 Art meets science in Artist Boat’s Eco-Art Camp sessions in Galveston. Campers will experience true science and art enrichment with the creation of Eco-Art. Each camper will create high-quality art projects which illustrate all that they have learned throughout the camp. Artist Boat will feature 2 daily eco-art camps from 9am to noon and from Bring out the whole family to take part in aircraft-themed activities for the 2-week long Spring Break at Lone Star Flight Museum. Each day will feature different demonstrations, talk, and demos. Schedule Saturday, March 7 – For the museums' Member Appreciation Day, there will be a member reception, DC-3 Tours, and virtual drone ride-a-longs. 10am The internationally acclaimed Cirque du Soleil visits the Children's Museum Houston for a Spring Break show. Witness a mind-boggling performance by the one-and-only, Cirque du Soleil as they give you a preview of Alegria.  Admission Included with general admission to the museum. Click here to purchase tickets or for more information. This Boosted Calendar Listing was sponsored by Lucky's Pub in EaDo hosts Bands, Bugs, and Green Suds as part of their 13th Annual St. Patrick's Day events. The pub will be tapping the first green keg of the weekend and everyone can enjoy $1 green beers all night. There will also be live music and $3.99 crawfish at Lucky's Lodge. Click here Bring the kiddos out to Galveston and join Texas Seaport Museum this March for their Seaport Spring Break workshop series. For the 1-hour long Let's Talk Trash program, you'll discuss marine debris and how you can help save our oceans from more pollution. You will also be making reusable recycled T-shirt Bags for you to 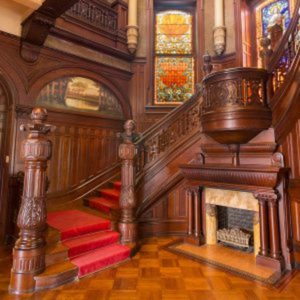 Bring the kiddos out to Galveston and join 1892 Bishop’s Palace this March for their Spring Break workshop series. For this workshop, you'll learn about historical architecture in a tasty way. Participants will build their own houses out of cookies, candy, and frosting while they discover what it takes to keep a house standing. Classes are Children's Museum Houston hosts its very own CHM Idol singing show for Spring Break. Perform your favorite song at an open mic session complete with encouraging advice to get you to that next level of talent. After taking the stage, sit back and enjoy a special performance by America's Got Talent semi-finalist Christina Wells and season 11 American

Out of an abundance of caution surrounding the Coronavirus, this event has been cancelled. The Houston native, singer, and rapper, Lizzo, headlines the evening’s rodeo festivities inside NRG Stadium. Before the concert, watch cowboys and cowgirls battle duke it out in series of rodeo competitions, plus the crowd favorite mutton bustin‘. Click here for

Reckless Kelly in Concert at House of Blues Catch a live set from the country-rock band, Reckless Kelly, on their "Luck of the Restless" Tour at House of Blues. Mike Donnell Band opens the show. Admission Tickets start at $25. Click here for more information. Photo courtesy of Live Nation This Boosted Calendar Listing was sponsored by the event organizer. These

Pat Green in Concert at The Rustic

Sojourns on the Silk Road: From the Orient to the Occident at MATCH 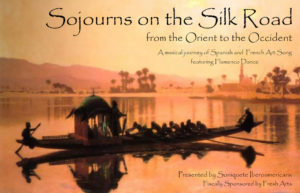 Soniquete Iberoamericanx presents the musical performance, Sojourns on the Silk Road: From the Orient to the Occident at MATCH. The show is a musical journey of French and Spanish art song on themes of the "Orient" featuring mezzo-soprano Jessica Blau, pianist Katherine Ciscon, guitarist Marc Rosenberg, and internationally-acclaimed flamenco dancer Fanny Ara. The 19th century Western

Stages Repertory Theatre presents The Fantasticks at The Gordy (Canceled)

Out of an abundance of caution, these events have been canceled. Stages Repertory Theatre inaugurates their brand-new theater with the classic musical, The Fantasticks. The longest-running musical ever, it’s a charming story about young love, meddling parents, and how to endure through adversity. The show’s been given a refresh for a contemporary audience,

Beautiful: The Carole King Musical at The Grand

The Grand 1894 Opera House hosts the Beautiful: The Carole King Musical for two weekend performances. Beautiful tells the Tony- and Grammy-winning inspiring true story of Carole King’s remarkable rise to stardom. Revel in the sounds of “I Feel the Earth Move,” “One Fine Day,” “(You Make Me Feel Like) A Natural Woman,” “You’ve Got A

FPA presents The Great Divorce at the George Theater 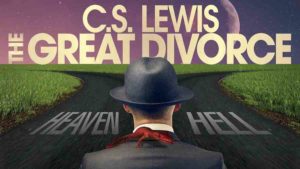 The Great Divorce—C.S. Lewis’ mesmerizing fantasy about heaven, hell and the choice between them—comes to life with the author’s signature wit, amazing actors, and state-of-the-art stagecraft. Lewis’ characters take a fantastical bus trip from Hell to the outskirts of paradise. Each receives an opportunity to stay… or return to Hell, forever divorced from heaven. The Out of an abundance of caution, this event has been cancelled. Based on the true story of a summit between President Jimmy Carter, Israeli Prime Minister Menachem Begin, and Egyptian President Anwar Sadat, this drama by Lawrence Wright, Camp David, illuminates the very human elements behind the process of peace. Watch the play

Your Favorite Night With Ku Egenti at the Secret Group 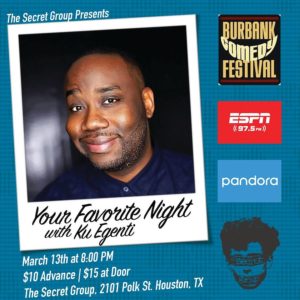 The Secret Group in EaDo hosts Your Favorite Night With Ku Egenti, featuring the popular local comedian, for a night of hilarious comedy. Egenti is a nationally touring comedian. A regular guest on ESPN Houston 97.5, he recently performed at Burbank Comedy Festival 2019. He's opened for Paul Rodriguez, Ali Siddiq, Jen Kober, and Billy

Et Voilà Théâtre presents the comedy, Duck à l’Orange, offered in French with English subtitles. It’s the story of the womanizing Hugh, who cheats on his wife Liz. But when Liz leaves him for her own lover, Hugh tries all he can to win her back. Admission Tickets are $15. Click here to purchase tickets Catch a live set from the local singer-songwriter, Billy Pope, at Downtown Conroe's restaurant and venue, Pacific Yard House. Show begins at 8:30pm. Admission No cover. Click here for more information.       This Boosted Calendar Listing was sponsored by the event organizer. These are expanded beyond our basic listings, featuring event graphics and images and Out of an abundance of caution, this event has been postponed until further notice. Featuring standup comedy and burlesque, KiKi Maroon's Burly Q Lounge returns to House of Blues. The evening of Vegas-style vaudevillian hijinks will transport you to the speakeasy your grandparents never told you about. Click here for future show dates, tickets,

Clé Houston hosts its grand re-opening with a live performance from the trap and bass music DJ and producer RL Grime. Admission Tickets are $30. Click here to purchase tickets or for more information.