Grab your hot cocoa, fuzzy socks, and ear muffs as the Discovery Center turns into a Frozen-themed winter wonderland. Explore the interaction between crayon and watercolor as you paint your own winter scene in OcuSoft Art Academy, Create a finger puppet of a tuxedo-wearing bird from the South Pole in Junktion, and many other Winter activities. Admission Tickets

The beautiful Rainbow Lodge will host its annual Champagne and Caviar Dinner with Champagne Bollinger and Champagne Ayala and featuring master sommelier Craig Collins. Admission Price and menu to be determined. Click here to reserve your seats by email.

Bring over your board games and grab a table at Rudyard's large upstairs play space for their Wednesday Board Game Night. Admission No cover. Click here for more information.

Stages Repertory Theatre presents Panto Hansel & Gretel, by Adam Howard, on its Arena Theater stage in Montrose. Follow the breadcrumbs into an outrageous reimagining of the tale of Hansel and Gretel as two selfish Houston parents pursue their dream to be stars of the theatre after leaving their social-media-obsessed children in the woods. It’s going

|Recurring Event (See all)
An event every 1 week(s) on Monday, Tuesday, Wednesday, and Thursday that lasts 0 day(s) and 0 hour(s), the last of which will begin on Thursday, November 21, 2019
Prohibition Supperclub & Bar,
1008 Prairie Street
Houston, TX 77002 United States
+ Google Map 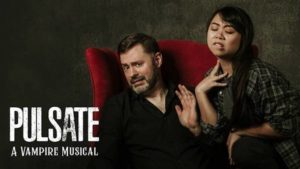 Prohibition Theatre hosts the world premiere of Pulsate: A Vampire Musical, and immersive, electro-pop musical about vampires, witches, werewolves, and humans. Expect an evening of aerial wizardry, vampiric fighting, dancing, sexy beats, and a bit of blood in this irreverent, dark comedy. The story touches on themes on tolerance, change, and the fight for coexistence. Vampire,

The Children at The Rec Room

Brandon Weinbrenner directs the Houston premiere of the Tony Award-nominated play, The Children at The Rec Room.  It’s the story of two nuclear engineers in a cottage on the British coast who watch the world disintegrate around them. Together, they are determined to live forever on yogurt and yoga, until a friend shows up and

The distinctly smooth sounds of the Canadian pop singer, Alessia Cara, thrived on her sophomore release in 2018, The Pains of Growing Up, and her recent EP release, Rooting For You. Watch her perform live along with opener Ryland James at Revention Music Center. Admission Tickets are sold out at the venue, but you may find

The Secret Group hosts the weekly $2 Bill Two Dollar Comedy Show every Wednesday in EaDo. There will be happy hour throughout the comedy show, and the karaoke afterwards, with $2 cans of Tecate beer and $5 shots of Espolòn Tequila. There will also be free chips and sals from El Real Tex-Mex. Hosted by

Karaoke Wednesday at The Secret Group

Sing until your heart's content when The Secret Group hosts a Wednesday Karaoke night. Admission No cover. Click here for more information.

Cursive in Concert at Satellite Bar

After a six-year hiatus, the indie rock group, Cursive, has released two albums in two years, 2018's Vitriola and the early-October release of Get Fixed. Watch them along with Cloud Nothings and The Appleseed Cast at Satellite Bar. Admission Tickets are $22, but you may find better or cheaper tickets using the TicketNetwork online marketplace.

Lulu Santos in Concert at House of Blues

The Brazilian singer and guitarist, Lulu Santos, has a deep catalog of international hits that extends into the early '80s with his debut album, Tempos Modernos. Now, the legend visits House of Blues just a couple years from his 2017 release, Baby Baby!. Admission Tickets start at $45, but you may find better or cheaper

Ancient Cat Society in Concert at Under the Volcano