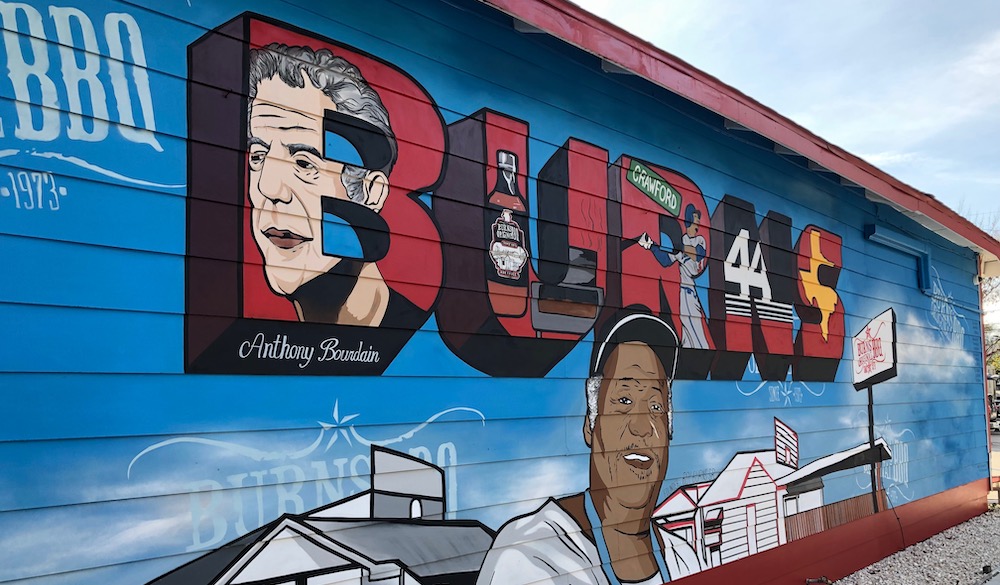 Celebrate the late Anthony Bourdain and an iconic family business known for smoked ribs, brisket, and other favorites at Donkeeboy’s mural at Burns Original BBQ.

Located on the Northside on the side of the restaurant, Houston-based artist and muralist Alex Roman Jr., better known as Donkeeboy, honors both the history of the restaurant and the great Anthony Bourdain, who visited the famed BBQ joint twice.

Open since 1973, Burns has been a fixture on the Northside of Houston for decades with Bourdain having visited the restaurant in 2016 and in 2004 for a Food Network segment.

A longtime customer and proponent of Burns Original BBQ, Slim Thug accompanied Bourdain at the eatery during Bourdain’s 2016 tour through Houston for his popular CNN food show, Parts Unknown.

The mural features unique elements representing the history of Burns Original BBQ, including a portrait of Bourdain; Burns Original BBQ Sauce; Crawford’s brother and former professional baseball player Carl Crawford; and the 44 Acres Homes bus route logo along with the state of Texas.

Completing the lower half of the mural are images of the old and new Burns Original BBQ locations on both sides of the restaurant’s founder, Roy Burns Sr., Cory and Carl Crawford’s grandfather.

As for the artist? A Houston native who grew up in Mexico, Donkeeboy is known for creating paintings and apparel that depict pop culture, putting his own unique spin on famous icons with works of art that consist of double entendres and visual puns.

Budding photogs should note that though the parking is free, the lot is for customers. We advise that if you are not dining in, to be courteous to the business and move your car after snapping a photo.

If you’re sticking around the area, check out other area favorites and must-dos. There are plenty of other parks, bars, restaurants and more, just waiting to be discovered around the corner.

Houston Nightlife: The Best Bars on the Westheimer Curve in Montrose

Where to Work Out in Montrose