Home Destinations + Landmarks Attractions Step inside an interactive ode to H-town at Open House at Sam... 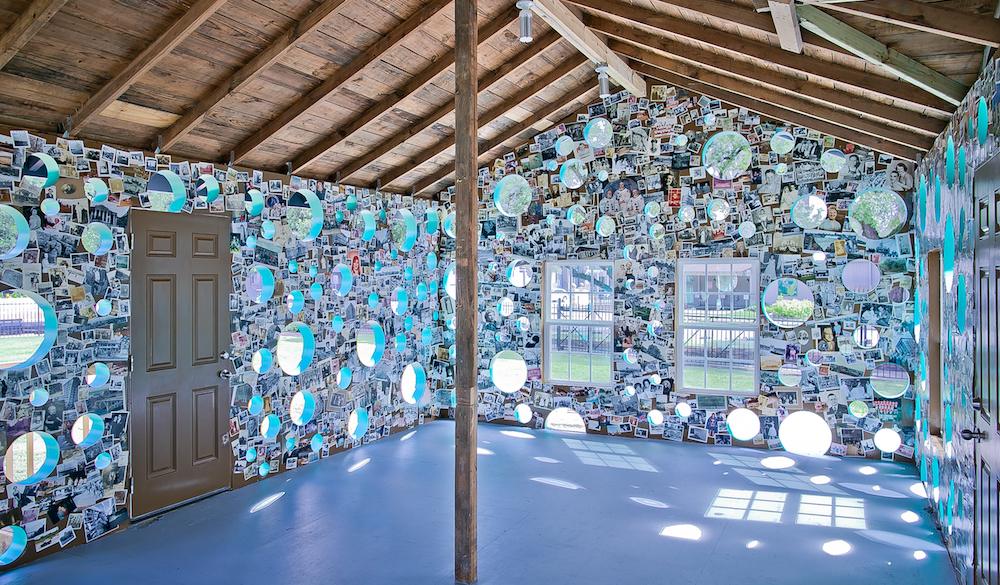 Get a look at Houston’s past and present at Open House, a small house turned peephole public sculpture, on view at Sam Houston Park through February 2019.

Created by Houston-based artist collaborative Havel Ruck Projects (Dan Havel and Dean Ruck), Open House gives visitors an architectural gaze of both the city’s modern skyscrapers of Downtown and surrounding landscape through holes that have been carved out of the house.

Open daily from dawn to dusk, the project serves as an addition to The Heritage Society’s ten historic 19th-century buildings and exhibits exploring the city’s history. The new addition fits right in with its vintage photo-lined interior filled with images sourced from family, friends, and local resale shops representing the city’s people, places, and past.

A part of Downtown District’s Art Blocks initiative, the immersive artwork is the sixth project in this stunning series that aims to feature world-renowned artists and designers repurposing and reenergizing under-utilized spaces through public art.

For an added bonus, check out the artwork in the evening. At night, the house will even be lit from within, creating a lantern effect from the home’s Swiss cheese-like appearance.

After moving the home to Sam Houston Park in April, Havel and Ruck started by stripping the structure’s interior and exterior. Using drill saws and other tools, they cut circular holes into the walls and filled them with PVC pipe.

At the end of the project’s run, the artists will recycle as much material as possible by distributing it to artists and craftsmen in need; the remainder of the structure will be removed, and the site restored to its original state.

Since 1994, Havel and Ruck have worked together repurposing architectural structures into works of art in public and quasi-public environments.

By reorganizing the physical construction of unremarkable spaces and places, their sculptural interventions bring attention and recognition to utilizing under-appreciated, ordinary buildings and their histories to create extraordinary visual experiences.

Among their notable projects are Inversion (2005), which transformed two of Art League Houston’s condemned studio bungalows into a temporary public art event; Fifth Ward Jam (2010), a temporary sculpture that converted a wood frame house into a performative sculpture and community stage; Give and Take (2009), a dual-site project realized as part of the exhibition No Zoning: Artists Engage Houston at the Contemporary Arts Museum, Houston; and Ripple (2018), at the Cherryhurst House in Montrose.