Help blow out the candles for the Lone Star Flight Museum’s resident B-17 Thunderbird at a special 73rd birthday party at Ellington Field on Saturday, May 12, 2018 from 11am to 1pm.

Lone Star Flight Museum at Ellington Field will welcome party-goers celebrating the storied history of the museum’s very own B-17 Thunderbird—one of only ten B-17 aircraft still flying in the world.

This particular Thunderbird, part of the museum’s permanent collection, rolled off the assembly line at Lockheed’s plant in Burbank, California on May 8, 1945; the very same day that Germany surrendered and ended World War II in Europe.

In true birthday party fashion, guests are welcome to partake in face painting, balloon art, and food samplings from Chik-fil-A. Of course, it’s not a birthday party without cake. So Houston favorite Nothing Bundt Cake will be on hand, serving up tasty slices to all.

Along with the festivities around Lone Star Flight Museum’s largest aircraft in operation, you’ll also get a chance to explore the aviation museum’s extensive exhibition spaces, flight simulators, and Texas Aviation Hall of Fame.

During the closing years of World War II, the “Flying Fortress” B-17 aircraft traveled across Nazi Germany, engaging in hundreds of campaigns to neutralize their war-making capabilities.

The B-17 Thunderbird on display at Lone Star Flight Museum rolled off the assembly line at Lockheed’s plant in Burbank, California on May 8, 1945; the same day Germany surrendered to end World War II in Europe.

While the original “war weary” B-17 aircraft were scrapped long ago, Lone Star Flight Museum’s demonstration Thunderbird serves as a symbol of America’s military airpower in World War II and a tribute to the young men and women who fought for freedom in that war.

The Lone Star Flight Museum opened the doors of its new $38 million, 130,000 square-foot aviation history and STEM learning facility in the fall of 2017. The world-class museum shares the story of flight in the Lone Star State and features the contributions Texas and Texans have made to aviation.

Highlights of the museum include the Texas Aviation Hall of Fame, the Museum’s renowned flying collection of historic aircraft, the $1 million, high-tech Aviation Learning Center, and dynamic hands-on exhibits. 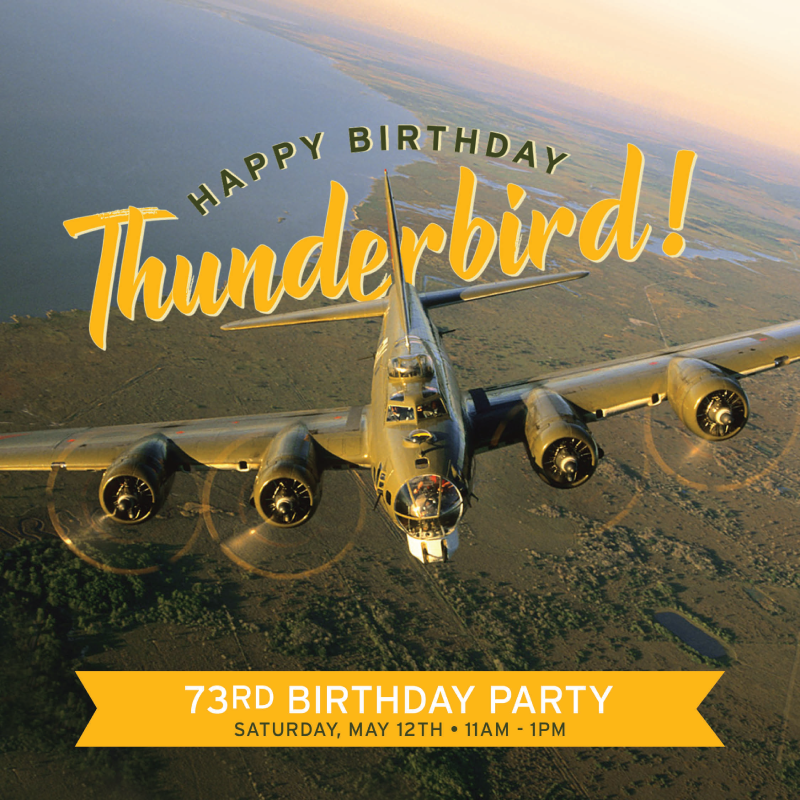 This post was sponsored by Lone Star Flight Museum. Per our advertising and sponsorship policy, we only accept sponsored content from organizations that meet our editorial standards and truly present a valuable activity, event, resource or destination for residents and visitors across the greater Houston area. Advertising revenue helps support 365 Things to Do in Houston, and our contributors, allowing us to expand our coverage of activities and events around the Houston area. Click here to learn about promoting your event or business.