Home Archives Past Festivals + Events Crack up with some Houston faves at the Casual AF Comedy Show...

Catch the hilarious, young guns of the Casual AF Comedy Show at Houston Improv on Thursday, May 10, 2018, and snag 2-for-1 tickets with promocode Comedy365.

Hosted by the Houston Improv club favorites Grady Pruitt, Victor Tran, and Tre Tutson, the three award-winning comedians will all be under one roof, for one night only.

Some of the most sought-after young comedians up-and-comers in Houston, each of the trio has been racking up the comedic accolades. Pruitt won Texas’ Funniest Comic, Tran won LaffTown’s Funniest, and Tutson is the hilarious show-stealing referee for the 12,000 Degrees Comedy Rap Battle.

Catch these hilarious Houston all-stars in what’s sure to be a stand-out night of stand up comedy in H-town this coming Thursday. 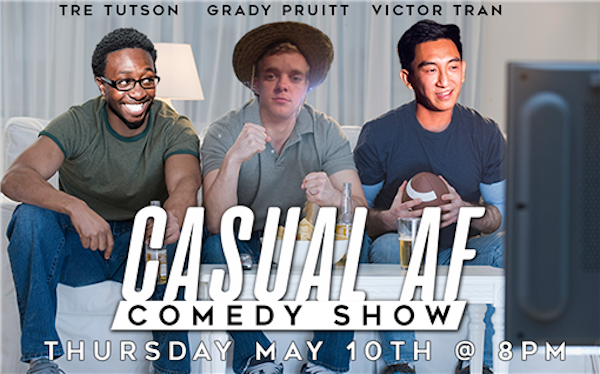