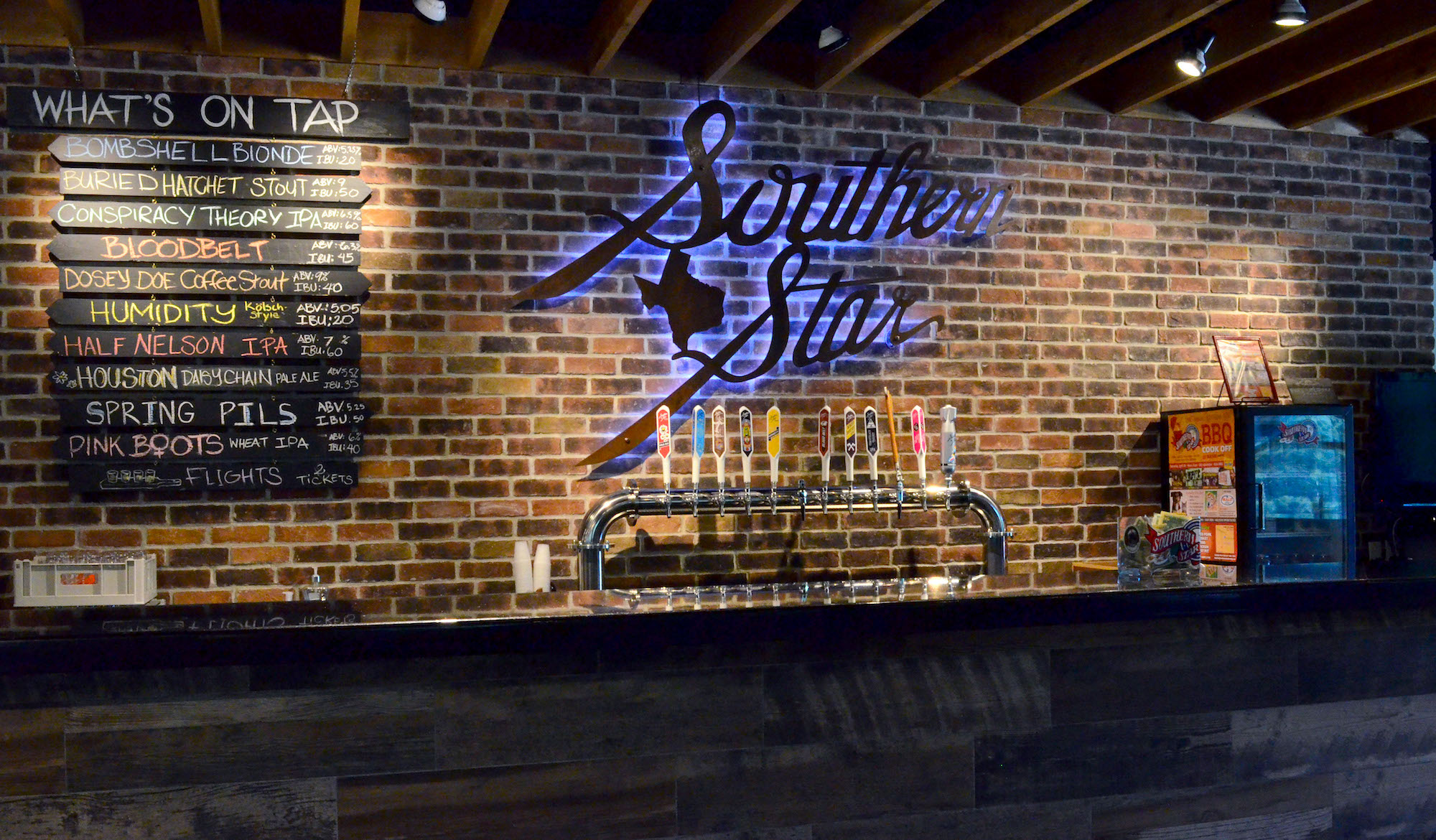 Look to the north to find Southern Star Brewing Company in Conroe.

When it comes to breweries in Houston, Southern Star Brewing Company has proven it has lasting power.

The second oldest craft brewery in greater Houston, Southern Star has been brewing since 2008 and, since their new taproom opened in 2016, they’ve become a destination brewery in the region.

Tucked away not far from I-45 in Conroe, Southern Star offers traditional brew styles that are well-balanced and thirst-quenching especially during the hotter months of the year.

Driving on North Frazier Street, be careful not to miss your turn for the road that winds down to the brewery and its taproom.

Coming down that road, Southern Star grows as does the realization that this brewery space is quite large at over 10,000 square-feet.

The main building is two stories, with the air-conditioned taproom sitting above the brewhouse with its towering fermenters and pallets of cans stretching to the roof.

A lawn spans the length of the brewery, dotted by tables, chairs, and games. A smaller outdoor bar sits among all the seating, saving visitors a trip up the brewery staircase for a refill inside the taproom.

Tables fan out across the taproom, bookended by the tap wall on one end and a merch table (including take-home beer) on the other. Each pint will cost you $4, or you can opt for a souvenir glass with three beers for $12.

It’s hard to go wrong with any beer on the Southern Star tap wall. Many of them are accessible, clean, and refreshing beers that are true-to-style.

If you can’t quite decide while standing in the taproom, give these a chance:

You’ll also find seasonals, specialties, and limited releases on tap with plenty of six-pack options that you can buy direct from Southern Star.

Hitting a Hole-in-One in Conroe

Over its first decade, Southern Star have distributed their brews all over the Texas region and reaching as far as Alabama, Florida, and Kentucky.

It’s beginnings, however, start on a small frisbee golf course in the Woodlands when founders Dave Fougeron and Brian Hutchins met and realized they shared a homebrewing obsession. Fougeron, who was a head brewer at Saint Arnold at the time, aspired to break free and take complete control over his brewing experimentation.

The pair joined forces to open Southern Star at the end of 2007 and have seen its distribution and reputation grow and take hold in the Houston area.

While you can find them on most any grocery shelf and gas station across Houston, the experience of touring their massive brewhouse and tasting Southern Star straight from the tap is worth a journey to Conroe.

If you want to tour Southern Star Brewery, drop in on Saturdays. Tours are available at 2pm and 4pm.

The second floor taproom and brewhouse are wheelchair accessible. To reach the taproom, you’ll find an elevator to your left just inside the front doors.

If you’re looking for food, go no further than the food trucks parked outside the front doors.