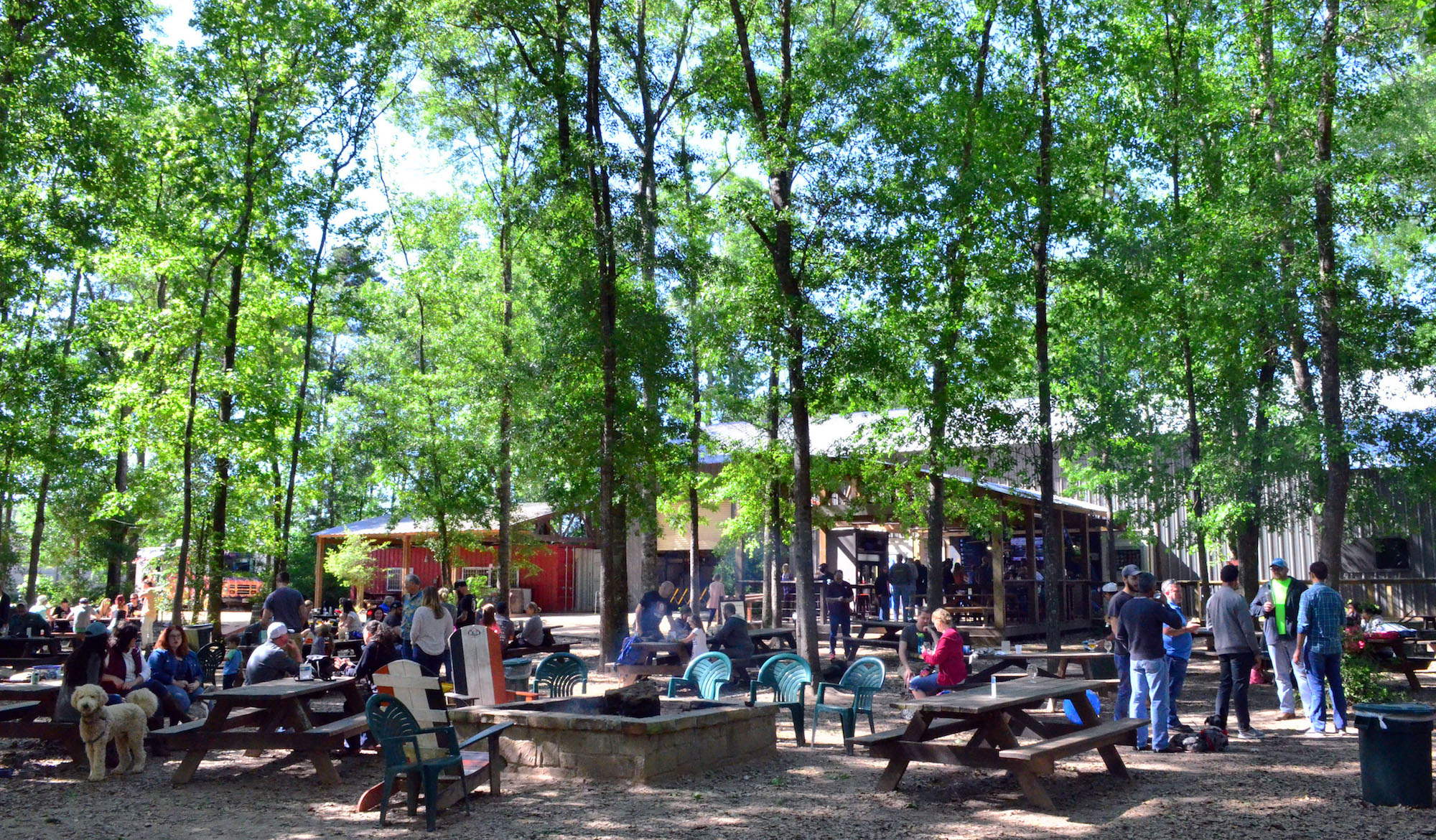 Camp out and try boundary-breaking brews at B-52 Brewing Co., just five minutes from Lake Conroe Park on Highway 59, in Conroe, Texas.

Imagine a brewery that opened in the middle of a national forest and you might be picturing something that looks a lot like B-52 Brewing Company in Conroe.

Nestled among seven acres of trees that stretch one hundred feet into the air, B-52 Brewing has created a unique setting that is a highlight on the growing list of local, regional breweries.

Just as distinct as their environment, B-52’s extensive menu of one-of-a-kind beers alongside respectable true-to-style offerings offer visitors a remarkably wide range of brews to enjoy.

A Laboratory in the Woods

Snaking your vehicle through the unpaved parking lot feels a bit tricky as you weave through standing trees to find a spot to call your own.

But once parked, head towards the sound of glasses clinking, paddles pinging and ponging, and a fire pit crackling to find the taproom and all of its many offerings.

To either side of you, rows of picnic tables extend toward the tree line providing a secluded feeling at B-52 Brewing. Games from ping pong to Jenga and cornhole are scattered throughout the area and prove popular with the scampering children found everywhere.

Though you might see a long line reaching from the covered taproom bar down the steps towards the seating areas, fret not. The staff at B-52 Brewing knows how to keep it moving.

The long list of classics, specialties, rarities, and guest brews will take a moment to sift through, so spend your wait studying the beer menus scattered near the bar.

B-52 Brewing is not exactly what you’d call risk-averse and they thrive in being able to offer truly one-of-a-kind styles that other breweries may shy away from.

On their constantly rotating menu, you might spot a Saison conditioned on passion fruit, pineapple, and strawberry. Elsewhere, you’ll find a bourbon barrel-aged stout conditioned on coconut, cardamom, and cinnamon with an ABV clocking in at 10.6%.

The brewing at B-52 is both broad and very specific, making return visits all the more enticing because you really can’t guess what’s coming next.

Of course, for those that would rather rely on trustworthy staples, you’ll find plenty to enjoy. Below are some of our recommendations.

For the kiddos and non-beer drinkers, B-52 also offers a cooler next to the taproom bar filled with additional drinks including ciders, wine, and Coca-Cola.

Pushing the Envelope of Brewing

B-52 Brewing began as a homebrewing obsession between two brothers, Chad and Brent Daniel, both Houston natives.

Out of a 12-keg operation in their garage, they expanded to the B-52 outdoor brewery in 2014 and began selling their beer commercially.

Tragically, Chad Daniel passed away in late 2017, sending ripples through the tight-knit Houston brewing community. His vision of pushing beer brewing into unexpected and surprising territory is what helped B-52 distinguish itself and the brewery has continued to pursue Chad’s legacy in their work.

B-52 Brewing is a unique brewery experience not easily found in the greater Houston area. When surrounded by towering trees, sipping the brewery’s boundary-pushing beer offers is a sense of escapism. It leaves visitors ready to come back.

Prices range for each brew depending on sizes, styles, and availability. Check out their full taproom menu for specific pricing information.

With no kitchen on-site, B-52 makes great use of the food truck community. You’ll find a food truck parked to the left of the taproom.

It might be in the middle of the woods, but the bathrooms certainly don’t reflect that. Follow the path to the right of the taproom and you’ll end up at a set of air-conditioned restrooms.

B-52 Brewing Company in Conroe

5 Must Do Things near Lake Conroe