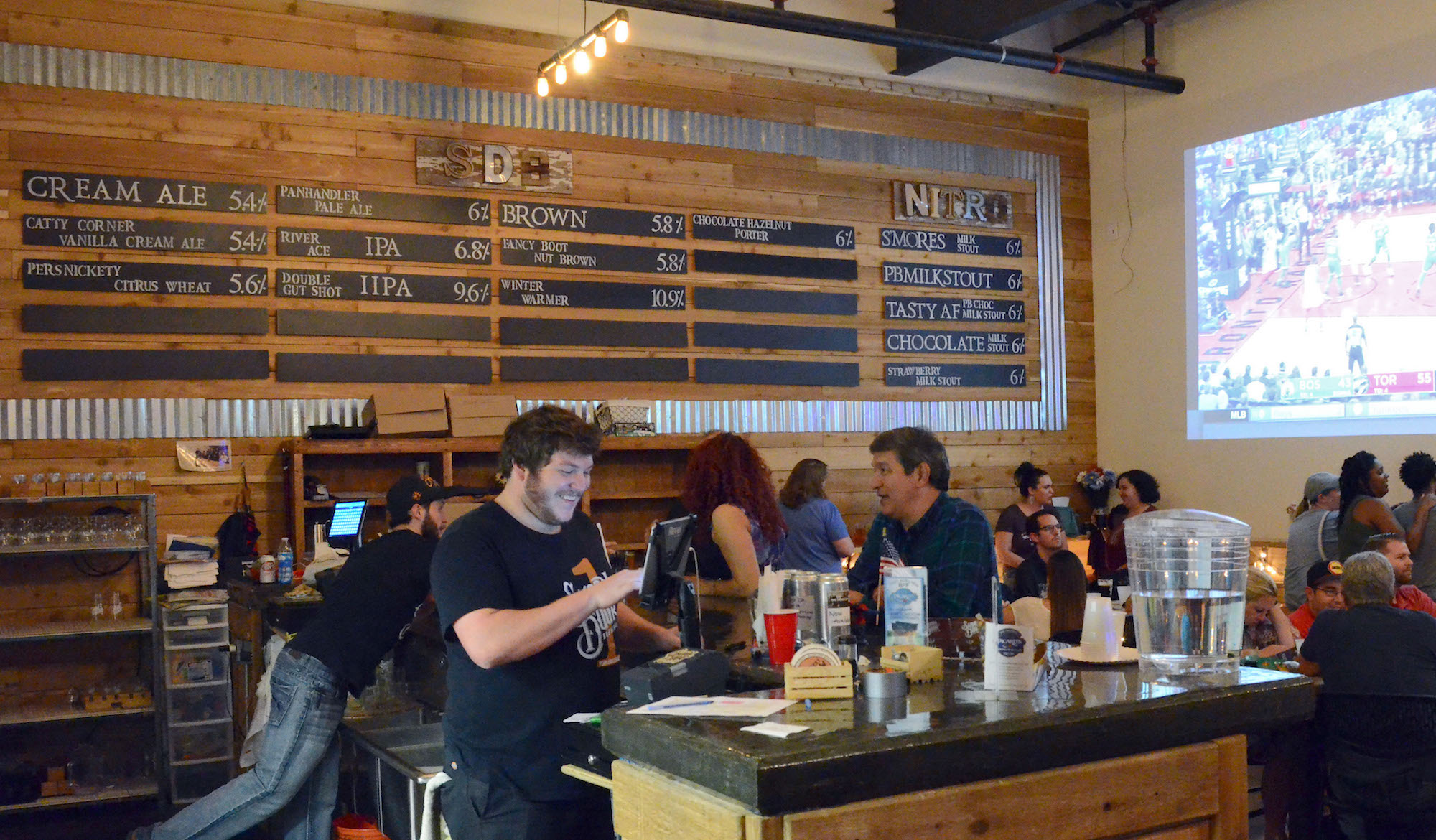 Go boldly through the daring doors of Saloon Door Brewing in Webster.

A few stoplights away from Johnson Space Center, you’ll find another group of people not afraid to be bold.

Saloon Door Brewing pours pleasing pints like you’ve come to expect from across the brewery spectrum. But the brewery especially excels when a beer drinker encounters their unbridled creativity.

Whether it’s the first time they’ve seen Peanut Butter & Chocolate Milk Stout on a menu or tasted the surprising lingering notes of cheesecake in the beer blend of the Catty Corner Cream Ale and a Strawberry Milk Stout, brewery goers will encounter flavors they haven’t seen before but can’t wait to try again.

Once inside, you’ll see that there’s just about a seat for each of the plentiful parking spaces outside.

Long rows of tables stretch from the front all the way to the back, guiding you to the taps in the far corner. Bar stools and smaller tables lie to either side of the long rows, accommodating all sizes of visiting groups.

Giant projections screens (usually showing sports) make great use of the high walls towering over the brewery interior, making this an enticing option to catch the next Astros game or a big Rockets matchup.

Finally, a small outdoor patio out front offers gorgeous sunset views and a nice, quiet alternative to the busy taproom.

Once you find the taps, take a moment to familiarize yourself with the extended menu before diving in.

Giant menu boards give you an idea of what is rotating in and out of their 18 to 20 taps, as well as any special offerings that are temporarily visiting the brewery. Nearby sheets also give you an idea of the 15 or so beer blends that combine multiple brews to create new and intriguing flavors.

When we stopped by, these beers left us impressed:

For those that somehow can’t find a beer or would rather be drinking something else, Saloon Door also offers cider and wine options from Dickinson, Texas’ DUO Winery & Cider Company.

From Batting to Brewing

Saloon Door is made possible by the combination of talents of founders Jason Graham, his father Jeff Graham, brewmaster Josh Anderson, and CFO Austin Webber.

Jason, a former baseball player out of Texas A&M, wound up in San Diego in the early 2010s where he apprenticed at Mother Earth Brewery and learned the ins and outs of the brewing process.

The group was able to swing open Saloon Door in April 2016 and have been delighting visitors off Nasa Road One ever since.

Want to get familiar with the menu ahead of time? Click here for details on their taplist as well as their signature beer blends.