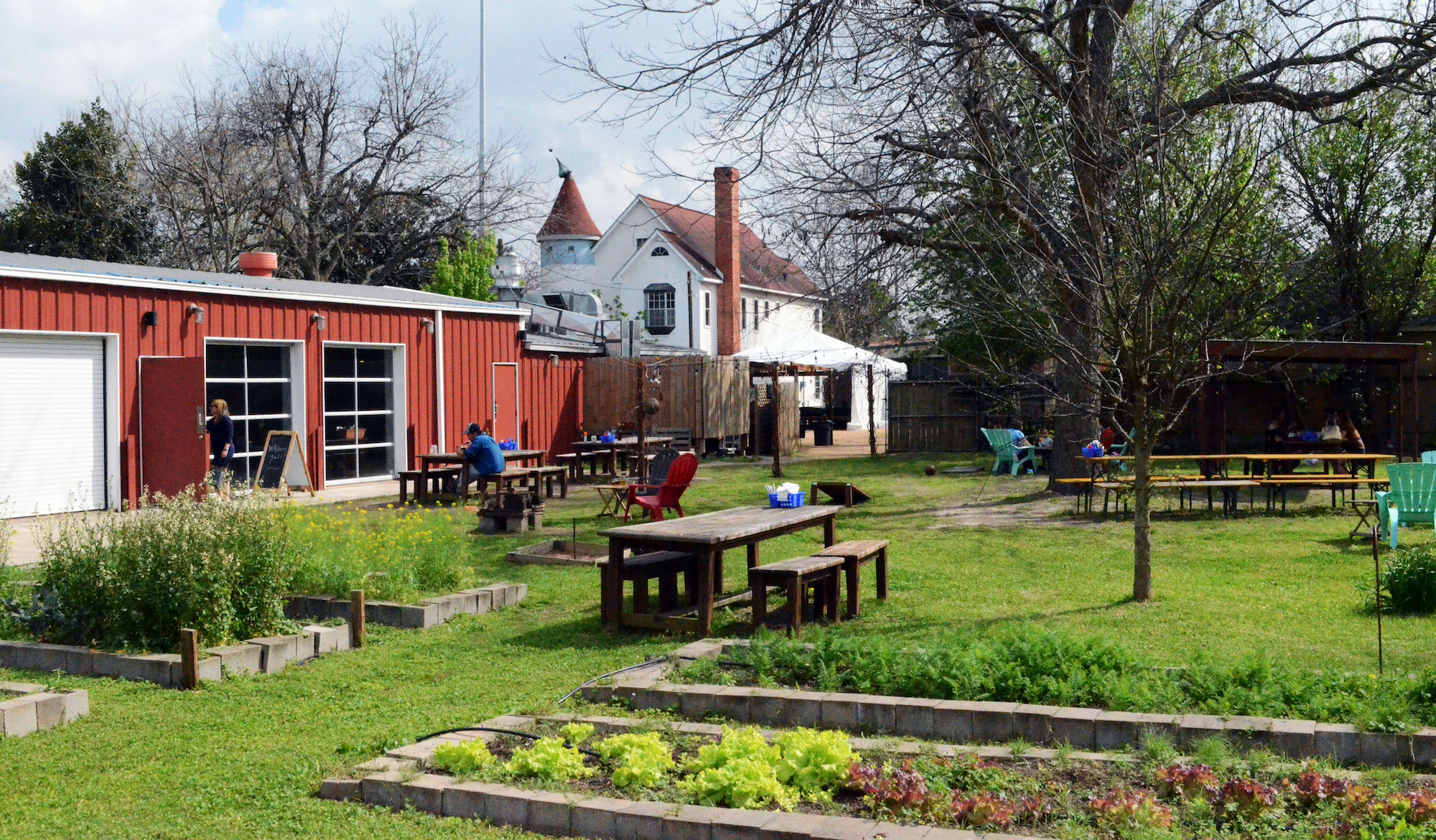 Plant your roots and sip on tasty ales in the tranquil gardens at City Acre Brewing in North Houston.

It may be just a block away from the US-59 feeder, but once you’ve entered the expansive front yard of City Acre Brewing, you’ll feel delivered to a place miles away from any bustling freeway.

And on a nice weather day, it’s hard to beat finding a seat among the tall swaying trees that dot the brewery’s gardens while imbibing in impressive beer and delectable foods.

A Garden of Earthly Delights

Make your way over from the gated lot across the street and through the rows of planters that greet you as you enter the vast City Acre grounds.

These planters are packed with almost 60 permanent fruiting plants that find their way into a hearty menu of burgers, sandwiches, salads, as well as a strong weekend brunch menu. They might even be slipped in with the beer too, for certain batches.

Beyond the gardens, you’ll find the barn-style taproom providing air-conditioned seating and frequently rotating taps. From tables to taps and benches, most of what you see inside is hand-crafted by the same minds behind the brews.

Out the taproom doors, you’ll find patio and beer garden furniture stretched across their grassy lawn, offering everyone plenty of choices to enjoy a drink while still feeling a bit of privacy from other patrons.

Finally, beyond both taproom and lawn, you’ll spot the towering two-story Victorian-esque home belonging to founders Matt Schlabach and his wife, Meredith Borders. This house served as City Acre Brewing during the pre-taproom years and now doubles as a special events venue.

Homegrown Brewing in a Homemade Taproom

With the lay of the land in mind, make your way back to the taproom where you’ll discover that the brewmasters have been cultivating their talents as well as their garden.

City Acre thrives thanks to the agility provided by small batch brewing, allowing for oft-rotating taps of new, old, and special brews along with a fresh menu for patrons on repeat visits.

When we dropped in, here’s what we enjoyed:

In addition to their taps, you can also find a menu bursting with beer cocktails, wines, and house-made sodas. The Cellar Bounty brewing series also offers a chance to try out beer made with their own garden ingredients.

For those that might be back another time or two or dozen, join the waiting list for the Mug Club. Every August, for an annual fee, the Mug Club provides an on-site 22oz. mug that gets members a deeper pour and access to special events like dinners, tasting sessions, and other perks.

Opening the Acre to the Public

Planning to open their brewery in 2012, the founding couple behind City Acre found themselves up against complicated beer bureaucracy that dampened the industry in Houston. For the time being, the space functioned as a special events location, hosting weddings and dinners while offering their beer.

Then, in the summer of 2016, with political hurdles cleared, City Acre opened their doors to the public and have found themselves well received ever since. This is due their focus on their craft brewing, seriously delicious food menu, and commitment to high quality ingredients.

While they don’t set aspirations toward being found in every bar and restaurant around Houston, they do relish in being what the local community has come to regard as a hidden gem.

Tucked away, transported from urban environments, City Acre Brewing on bright, blue day is as desirable a place to be as any city block inside the loop. The food menu here is just as worth a trip as the beer. From burgers and schnitzel (both are $11) to a weekend brunch menu featuring chicken & waffles for $11 and migas for $8, this brewery has plenty of choices to go with their wide variety of beer.

Bingo, tasting dinners, and movie nights highlight an active event schedule at City Acre. Keep an eye posted to their Facebook page to find an event that interests you.