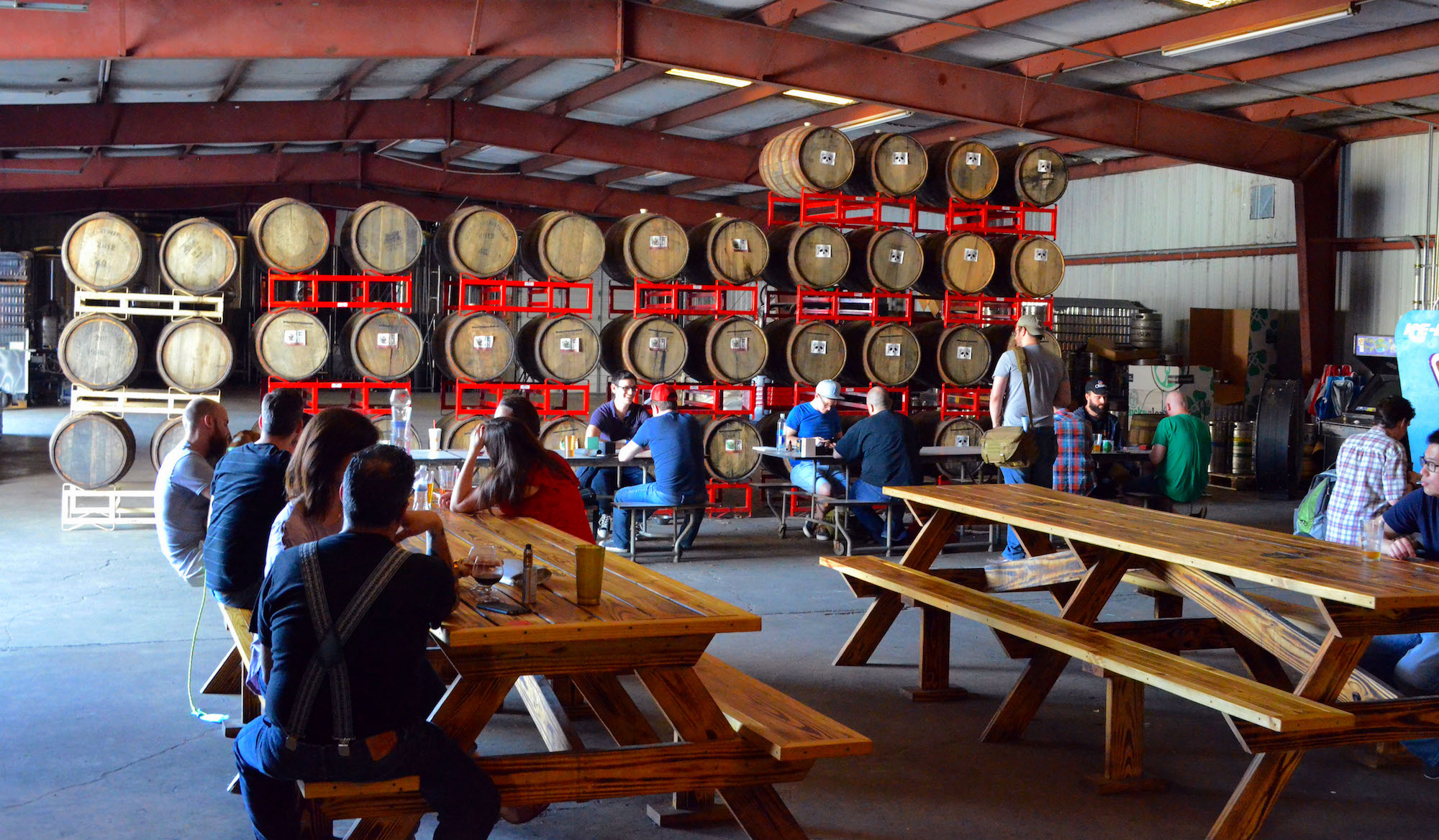 Just north of the Loop, there is a taproom flowing with beer that is big, bold, and unapologetic.

Brash Brewing Company isn’t trying to impress you but it’s hard not to walk away rewarded by the aggressively hopped IPAs and some of the best stouts this city has to offer.

Walking into the vast 13,000 square foot warehouse, you’ll be joined by others that sought out this tucked away taproom that’s especially easy to miss.

But if you spotted the slight sign off Crosstimbers Road, you’ll find a brewery equipped with beer garden tables in and outside, along with nearly two dozen arcade machines and foosball tables to entertain.

Along with Space Invaders, Pac Man, and even some Skeeball, your stop at Brash plays out to death metal, hardcore, and heavy music emanating from the corner jukebox.

Just as heavy as the taproom’s soundtrack, you’ll find the beers take bold forms of IPAs and stouts.

The Pussalia IPA fills the senses with dank aromas and bright, citrus flavors. Aggressive and assertive, this makes a great beer for those already well-versed in well-hopped brews.

Milk the Venom is their outstanding American Stout offering, delivering thick, roasted notes in a smooth and creamy beer. Though, make sure to mind the 9% alcohol hidden underneath the mocha flavor.

Cali Green is an American IPA that presents bitter and strong flavors upfront. Bright but not as citrusy as other IPA offerings, this makes for a nice pour to take your time with.

Alongside their own taps, you’ll also find a selection of several handles reserved for guest beers. Having already collaborated with breweries around town, they return the favor by hosting select pours, such as the Saint Arnold Art Car IPA that was on tap during our visit.

Bringing Brash (Back) to Houston

The brainchild of Ben Fullelove, Brash Brewing Company has an interesting past with origins in the Northeast.

Fullelove, who owns the popular Petrol Station nearby, ran up against Texas law when wanting to open Brash Brewing (the state previously forbid one person from owning both a bar and brewery).

After forming a relationship with Ipswich, Massachusetts’ Clown Shoes, Fullelove was able to brew out of New England and ship his beer around the country.

For those beer obsessives that found themselves shipping six-packs home to Houston from out-of-state, the landmark 2013 brewery legislation would bring Brash much closer to home.

Now with legal hurdles dissolved, Fullelove has been operating Brash Brewing in the Garden Oaks neighborhood since 2014.

And while you won’t find any strawberry beers or pilsners on tap, the thick and hoppy fruits of Fullelove’s extensive efforts remain ripe at Brash Brewing.

The massive warehouse makes it possible for Brash to host events from time to time, including special releases, live music, and the occasional Heavy Metal movie screening.

Prices range depending on the beer you’re after, but pints will generally run $6 to $7 with 32oz. To-Go Crowlers going for double the pint price. Six packs are available randomly and run $12 to $16. Keep an eye on Brash’s social media for beer availability the day of your visit.

Food trucks commonly drop by but you’re more than welcome to bring in your own outside food.

5 Must Do Things in Garden Oaks & Oak Forest