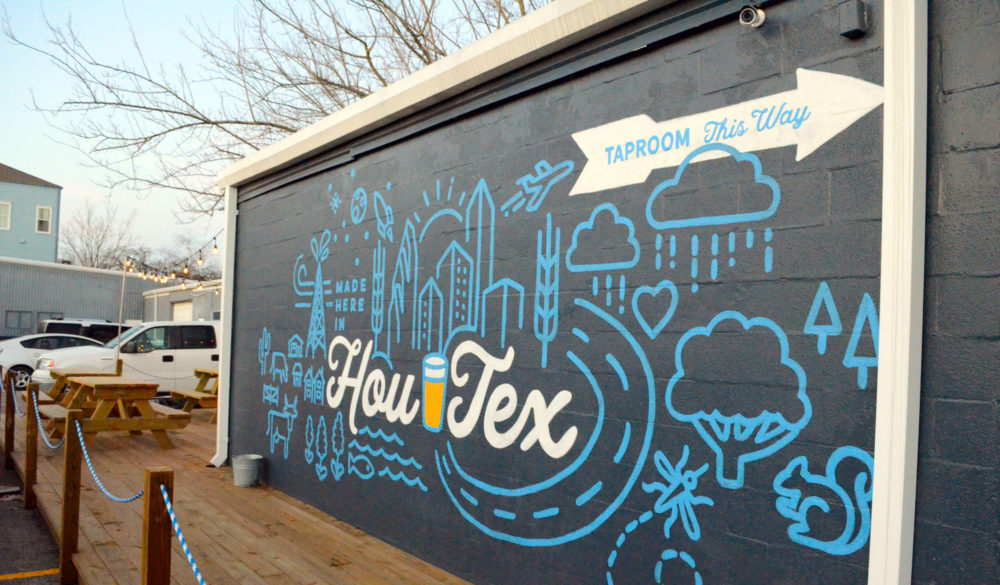 Stepping into Great Heights Brewing Company, you should know that you might be sticking around awhile.

It’s hard not to be drawn in by the friendly faces that tend the bar, the selection of games to play, and the delectable pours that will have you returning to the taps.

Opening just as Hurricane Harvey swept over Houston in August 2017, Great Heights has been serving beer that tickles tastebuds and delights fans who can’t get enough hops.

Just a block away from a Houston mainstay, Petrol Station, you’ll find Great Heights nestled among rows of houses along Wakefield Drive.

That neighborhood feel continues inside the front doors, as you weave through rows of beer garden-style tables under a web of lights that string across the ceiling.

The casual atmosphere here is one that you can really sink into, whether you’re watching any of the hometown favorites on the taproom televisions or ducking out to the cozy outdoor patio in the back of the brewery.

Outside, you’ll find a very ‘grammable wall mural and it isn’t uncommon to see people stop by just to take a photo and move along.

Of course, part of that mural points thirsty beer enthusiasts around the corner to the taproom where you’ll have a pick of any of the several rotating selections on the draught board.

The Great Heights Amber makes an excellent entry beer for new visitors, offering a quite malty, dry punch that is accessible and enjoyable to drink.

In the colder seasons, the Great Heights Porter is a no-nonsense true-to-style staple. A tad nutty with a bitter finish, this makes for a great pour that isn’t overpowering.

So Inclined is their Saison offering, not often found on brewery tap lists. This brew provides a complex flavor that features fruity and spicy notes with a crisp finish.

Founders Sean Bednarz and Patrick Christian certainly know something about change. Spying the future taproom while hanging out at nearby Petrol Station, the duo left their desk jobs behind in 2016 to pursue a brewery dream.

Having opened their space to tout their passions, they’ve embraced change as something not to fear by featuring new brews every other week or so.

Tweaks to their recipes (and occasionally the taproom space itself) rewards return visits and offers a chance to try something fresh and updated.

That fearlessness has led Great Heights Brewing Co. to rise to the level of a neighborhood watering hole for all—with plenty of changes on the horizon.

With a menu that boasts several offerings, you’ll pay a flat $5 for your choice. Takeaway growler pours in 32oz and 64oz varieties are available for as much as $12 and $16, respectively.

Food trucks are often found out front of the brewery, just feet away from the tables lining the inside. Keep an eye on social media to find out who’s stopping by for dinner.

5 Must Do Things in Garden Oaks & Oak Forest

Savor the summer with our picks for things to do with...