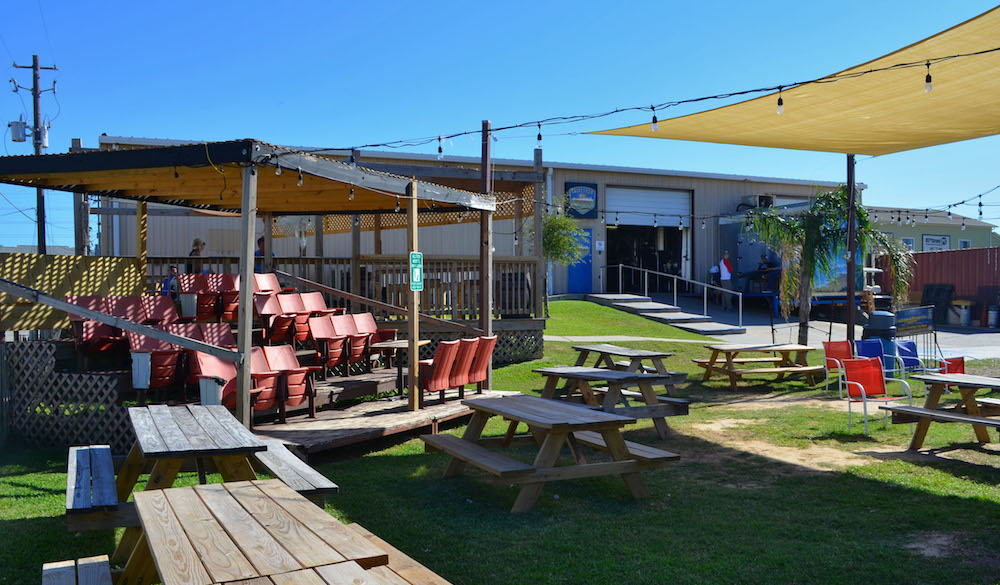 Whether you’re coming off the beach, exploring down the seawall, or just trying to find a cold pint of beer, Galveston Island Brewing offers you award-winning ales and spacious digs that invite connoisseurs, families, and pets alike.

With doors open since June 2014, GIB has quickly cemented (or is that fermented?) itself as an island mainstay for visitors and residents seeking out accessible session beers packed with flavor, hops, and a surprise or two.

Fresh Brews a Block from the Beach

Once you arrive, you’ll find a front lawn dotted by patio tables, a playground for children, a few rows of stadium seating, and a raised patio deck offering plenty of chairs and a bit of shade.

Don’t linger too long without a drink. Make your way into the taproom where, under the warm glow of a skylight, you’ll find around a dozen different beers crafted in the adjoining brewery.

The highlight on the tap wall is the Blue Ridge Amber Ale, a beer that carried bronze medal honors from the 2017 Great American Beer Festival. It’s well-balanced with a nice bite of hops that isn’t too overwhelming. Pleasant and slightly citrusy, it makes a wonderful start to your visit.

From there, you’re certainly not short of options. We were also able fond of the following brews from Galveston Island Brewing.

From Tugboat to Taproom

With around a dozen beers on tap, and several of those carrying award honors, Galveston Island Brewing finds itself in smooth sailing thanks to the efforts of owner and brew master Mark Dell’Osso and head brewer Jason Stromberg.

A one-time tugboat captain, Dell’Osso spent his free time crafting homebrews for his friends and co-workers. After winning a few awards for his efforts, Dell’Osso felt like he might be good enough to have his own brewery.

From there, he opened a tap room in an empty brewhouse with a few friends. Along with the help of Stromberg, the duo now hold multiple awards for several of their beers and have become a favorite brewery destination along the Gulf Coast.

No longer empty, Galveston Island Brewing also offers up their space for events including yoga, run and bicycling clubs, and drives that have provided dog adoptions and marine mammal rescue funding.

Prices for brews vary from $3 to $6.50 for a pint, or for $1.50 each, you can fill a flight of four beer samples. Growlers and six-packs are also available to-go.

Though the brewery itself is a bit small, tours are still offered on Saturday at 1pm. You’ll get a chance to see the brewing process and learn a little about the history of Galveston Island Brewing over the course of a half hour.

If you’ve come hungry, don’t despair. Soft pretzels, chips, and sandwiches are available at the bar.