Immerse yourself in films as diverse as our city at venues across town during the Houston Cinema Arts Festival 2017 (HCAF17), running for five days from Thursday, November 9 through Monday, November 13, 2017.

Now in its ninth year, Houston Cinema Arts Festival 2017 brings films focused on the arts for five days of viewing pleasure in a unique-to-Houston experience. Unlike other film festivals, HCAF17 is a curation of films about the arts, and their creators. It pulls from local, regional, and international talent to tell a global story about the arts and create fascinating, pop-up experiences.

Following the devastation and impact of Harvey, the one-of-a-kind film festival is returning once again in a big way, welcoming back HCAF alums; staging a tongue-in-cheek tribute to the city with Bun B and others performing songs from the movie musical Singing in the Rain; the return of the Space City-themed films of CineSpace, world premieres, and more.

Films are screened (and pop-up events held) a screens and partner venues across the city, including the Museum of Fine Arts (MFAH), Rice Cinema, and more.

This year’s lineup of films is exciting, compelling, and quite extensive. Click here to view a full, day by day line up of movies and events, and continue reading for this year’s main HCAF highlights.

The big event kicks off with two big films on Thursday, November 9, 2017.

Filmmaker Lisa Immordino Vreeland, an HCAF alum from 2012, will premiere Love, Cecil at MFAH. The film focuses on iconic British photographer, costume designer, and larger-than-life personality Cecil Beaton, who won two Academy Awards for his work on the classic musicals Gigi and My Fair Lady. A talk with the director and book signings will follow.

At Rice Cinema, native Houstonian, influential music video director (Taylor Swift, Katy Perry, U2, Eminem), and boundary-pushing filmmaker Joseph Kahn will present his brand new feature (winner of the People’s Choice Midnight Madness award at the 2017 Toronto Film Festival). A satire set in the world of contemporary battle rap, Bodied explores the dangerous spaces of the world’s most multicultural and artistically brutal sport. After the screening, Kahn will discuss his film with Houston’s own beloved hip-hop artist Bun B.

Singin’ in the Rain: A Houston & Cinema Arts Celebration

A tribute to Houston’s resilience after Harvey and a major highlight of HCAF17 will be Singin’ in the Rain: A Houston and Cinema Arts Celebration at White Oak Music Hall on Saturday, November 11, 2017.

Featuring live performances Houston hip hop favorite Bun B, popular jazz singer Kat Edmonson, and American blues singer-songwriter Carolyn Wonderland. Plus there will be a special presentation choreographed by Oliver Halkowich featuring Houston Ballet Dancers. The musical numbers will be unique renditions of songs from the iconic Gene Kelly film, which celebrates its 65th anniversary in 2017, and will be accompanied by energetic dance routines.

The event includes a screening of the classic movie musical, with the musical numbers performed and interpreted live.

As part of the evening, White Oak Music Hall will donate 10% of box office proceeds to its own Hurricane Harvey Relief Fund. It has also offered the venue to the Houston Cinema Arts Society for the program at no cost. 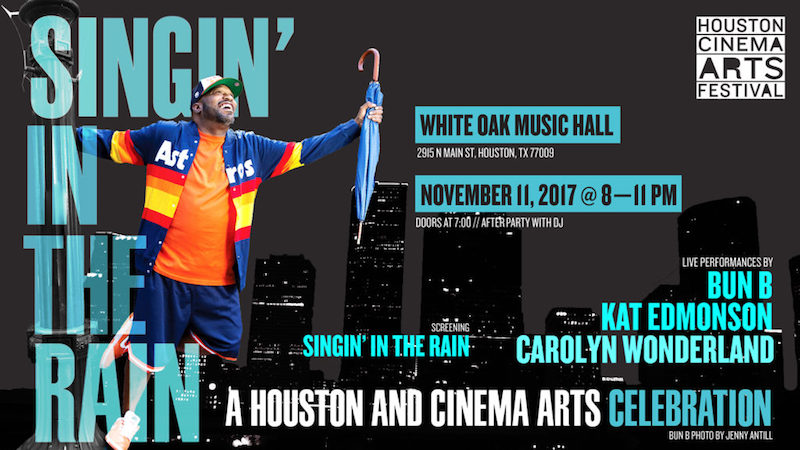 Two films about Houston artists will debut at MFAH in back-to-back screenings, on Sunday, November 12, 2017.

Cressandra Thibodeaux of 14 Pews will present Jesse Lott: Artist in Action about Fifth Ward-based painter Jesse Lott, who was recently awarded the 2016 Lifetime Achievement Award by the Art League of Houston. The film will be screened at

Filmmaker Wayne Slaten, whose short film Red Pearl was a prize winner at CineSpace in 2015, will premiere Ash: The Art of Wayne Gilbert about the eponymous artist who utilizes cremated human remains to create stunning artistic works.

A discussion between both filmmakers and their subjects will follow the screenings.

The short film competition CineSpace, presented in partnership with NASA, returns for the third year and will again be judged by indie director Richard Linklater. It offers filmmakers around the world a chance to share their works inspired by, and using, actual NASA imagery.

CineSpace finalists were selected from more than 650 global submissions and prize winners will be presented at Rice Cinema on Friday, November 10. 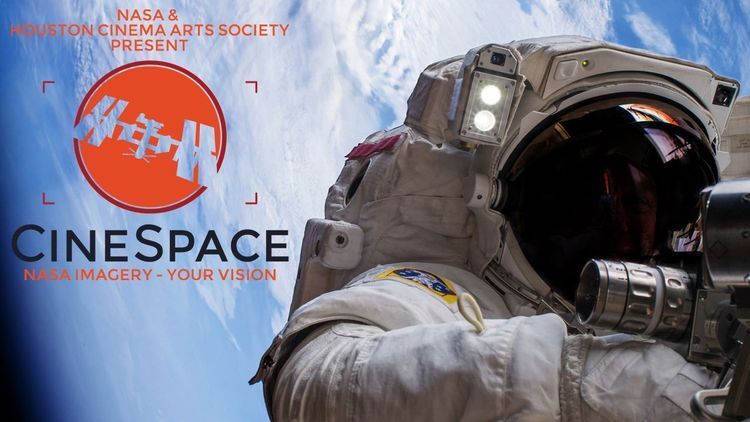 HCAF17 will also be the first opportunity for Houstonians to see films that have already become festival favorites, but have yet to be released. Last year’s festival goers were among the first to see the acclaimed musical La La Land, which went on to win five Academy Awards, including the titles of best actress, director, and musical score.

The festival closes with the local debut of the highly anticipated film I, Tonya on Tuesday, November 13.

Presented by the Houston Cinema Arts Society (HCAS), the Houston Cinema Arts Festival showcases films by and about artists in the visual, performing, and literary arts. Welcoming a bevy of Texas-born filmmakers, actors and other celebrity artists, showings are held at both traditional theatrical venues and through interactive video installations, live multimedia performances and outdoor projections.

This content was sponsored by Houston Cinema Arts Festival. Per our advertising policy, 365 Things to Do in Houston only accepts sponsored content from businesses and organizations that meet our editorial standards and truly present a valuable activity, resource or destination for Houstonians and Houston visitors.

Click here for more information about advertising your event, attraction, business or product on 365 Things to Do in Houston.

Enjoy a free evening of dance, music & film at Julydoscope