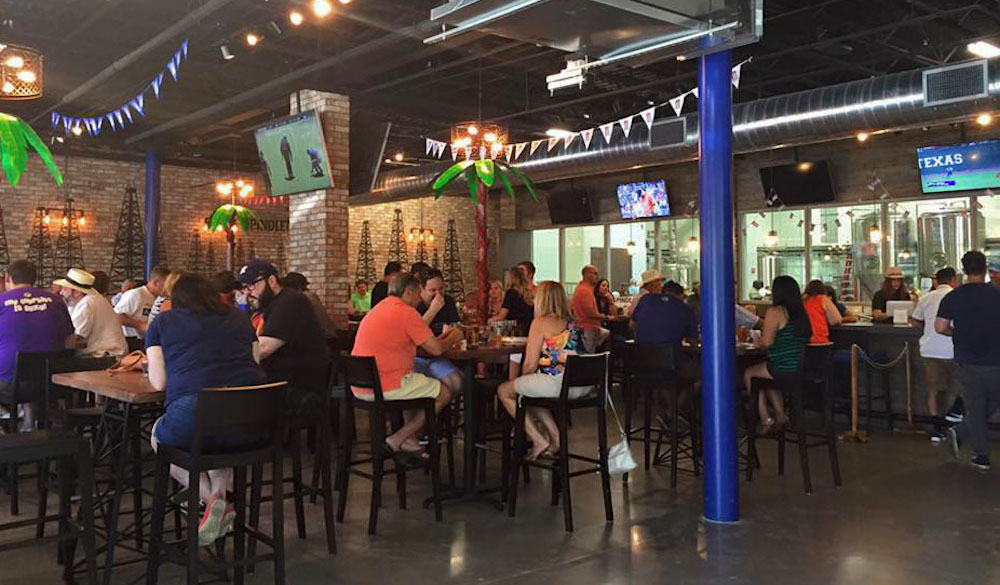 Relax and raise a pint of craft beer at the family-friendly Spindletap Brewery just off Little York Road in North Houston.

When you take in the number of breweries dotting the Houston landscape, it’s easy to overlook the struggles that led to the surge of craft beer in the local market. For years, outdated state laws meant there wasn’t a profitable way for most to open a brewery and sell to the public.

But in 2013, legislation was passed that made it feasible for homebrewers with a dream to explore how they can scale up and get their brews to thirsty Texans all over the state. That led to new taprooms, an explosion of craft creativity, and many of our favorite Houston beers today.

In North Houston, a group of friends rose to that challenge and, in the spirit of century-old oil discoverers, planted their own kind of derrick just off Little York Road in November 2016. Spindletap Brewery was born there with flowing beer as an invitation to locals, residents, and families ever since.

A Family-Friendly North Houston Destination for All

At Spindletap, you’ll find folks lining the bar to catch weekend football action, locals looking to have an “ahhhh” moment with a beer and burger, and maybe even a children’s birthday party in the corner. It’s a welcoming place for all and one of the only breweries in town where making the space comfortable for families is a major priority.

You’re never quite shoulder-to-shoulder with anyone as you move about their spacious indoor taproom. Behind the bar, you’ll find even more seating along their line of fermenters and a row of tables outside for when the weather is just right. When stopping by with family or friends, you’re sure to find a seat for everyone.

Step up to the bar to find Spindletap’s staples from the silky smooth Boomtown Blonde to the easy finish of the Honey Hole ESB (both carried over from founder Shaun Ebersole’s homebrewing days).

The Hop Gusher IPA, another favorite mainstay, delivers a crisp, full hit of hops to the tongue that shows the brewery’s skill in IPA brewing.

On any given day, you might also find special edition beers on tap. During our visit, we were able to sample the Houston Haze from the New England IPA series. Cloudy, fruity, and packing a juicy punch, this accessible IPA is a flagship beer worth seeking out on tap.

Other Houston Beers on Tap

Spindletap hopes to serve their community by bringing them excellently crafted beers (and not always their own) in a region of town that doesn’t boast the names of multiple breweries that neighborhoods like the Heights or East End might.

While you’ll find their craft brews pouring from the taps, the brewery also reserves guest taps for other Houston breweries. This makes Spindletap an excellent stop for those that can’t get down I-69 into the Inner Loop to visit those bustling breweries firsthand.

Spindletap’s community mission is also supported by the many events held at the brewery. Friendly and convenient rentals make it a popular spot for anything from birthday parties and baby showers to weddings to corporate events.

And when holidays roll around, Spindletap loves any cause for celebration. On their calendar, you might find a Halloween festival (complete with face painting, pumpkin decorating, and candy), pet adoption drives, and cultural gatherings (past events have highlighted Cuban, Greek, and Puerto Rican cultures).

Spindletap Brewery is an example of what’s possible when legislation is used to open doors for hungry Texas craft brewers to make a living doing what they love. In return, Spindletap offers great, flavorful beers and a family-friendly space that’s inviting to their local community and those venturing outside the loop alike.

Food trucks come out during special events but if they aren’t stopping by, don’t fear. You’ll be able to grab a burger from central Texas’ 44 Farms or a Derrick hot dog off the menu.

Keep an eye on Spindletap’s Facebook or Twitter accounts as hours are sometime subject to change. Football offseason might mean Spindletap is closed up on Sundays.