Home Archives Past Festivals + Events Gather your mateys for this weekend’s Search for Lafitte’s Gold in La...

Weigh anchor and get ready to embark on the epic quest for Lafitte’s Gold at the latest scavenger hunt festival to hit La Porte this weekend.

This Saturday, October 21, the City of La Porte will release treasure maps to aid pirates-in-the-making in their search for Lafitte’s gold online at Geocaching.com, including 10 new geocaches throughout the city that will also be up for grabs. Paper maps will also be passed out to residents on Saturday at Five Points Plaza in La Porte.

Adventure seekers should note that this weekend’s event is a great activity to do as a family or with a scout group. Click here for a complete list of festival and event information.

In the romance studded chronicles of Texas, the name and deeds of Lafitte, the pirate, loom large. It is a matter of historical record that his base of operations was once on Galveston Island and that his ships sailed up and down the coast of the vicinity.

One of the many legends of the famous buccaneer has its locale in La Porte. According to the tale, Lafitte once weighed anchor off what is now Bay Ridge. With two henchmen he unloaded a heavy chest and carried it into some thick shrubbery where it was buried and he returned alone.

If the legend is true and the pirate treasure was ever buried, it is still there for there is no record of it ever being unearthed. However, from time to time a few gold coins have been found in the beautiful bay waters.

To date the cache, if it does lie there, has defied the hand of man, until now.

The Search for Lafitte’s Gold in La Porte 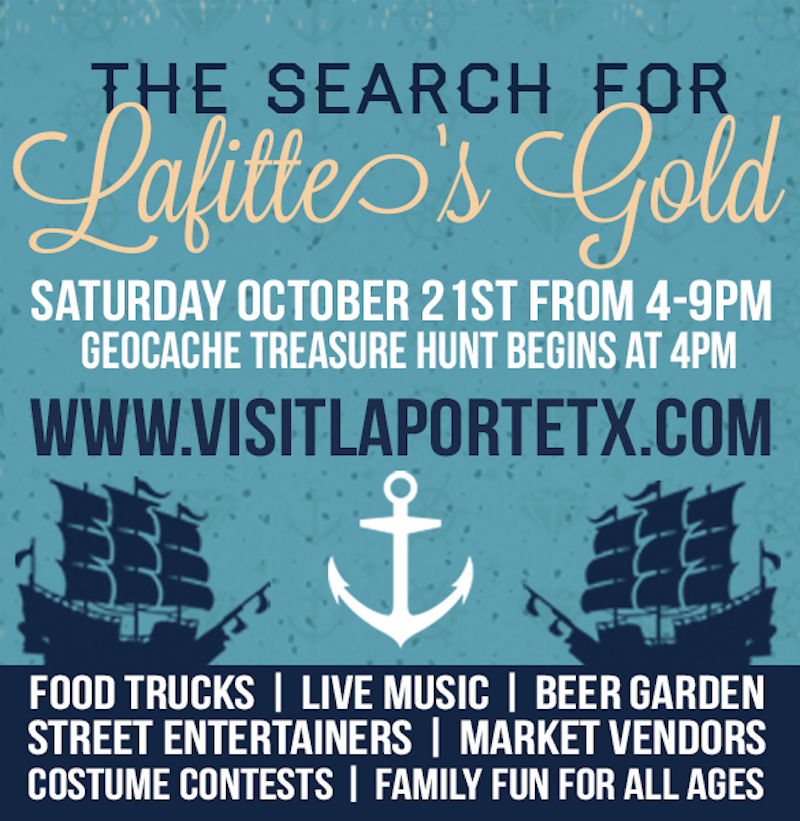 This post was sponsored by the City of La Porte, Texas. Per our sponsorship policy, we only accept sponsored content from businesses that meet our editorial standards and truly present a valuable activity, resource, or destination for residents and visitors across the greater Houston area. Click here to learn about promoting your event or business.

The 15 Best Things to Do in Houston This Weekend: September...