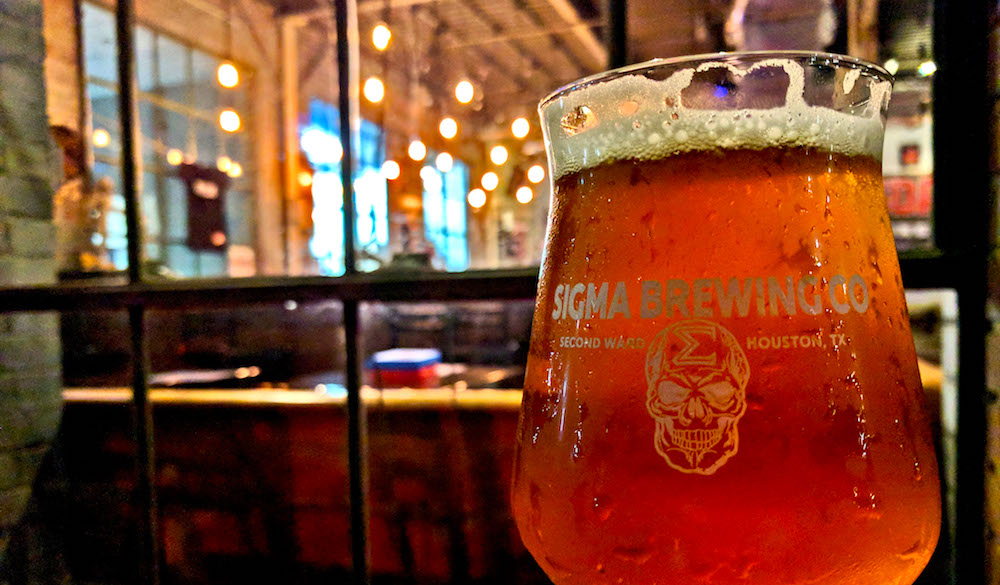 Unwind over eccentric and eclectic beers at Sigma Brewing Co‘s taproom and patio in the East End.

Walking into Sigma Brewing Co., standing within smell range of the soothing scents of the Second Ward’s nearby coffee plant, you might be greeted by a few familiar faces from the eighties.

Menacing smiles from the movie monsters of Predator, Alien, and Terminator all don the bar, alluding to pasts that the co-founders Nick Sorenson and Matt Peterson gave up to pursue their brewery dream.

Since then, the pair have assembled a brewery that highlights their passion for brewing and submits to Houston a rack of beers bursting with creativity and the unexpected.

Skewing to the higher alcohol end of the scale, Sigma gives patrons the chance to build flights of 5oz. pours for $2.50 each, grab an 8oz. glass for $3, or a full pint for $5. Taking home one of their signature beers in a 32oz. crowler will cost just $10.

Across their taplines, you’ll find an affinity for hops. Even their hoppy version of the entry-level blonde ale (dubbed the “XPA”) will leave a touch of bitter on your tongue.

Classic staples of an American Pale Ale and an IPA also dot their tap list, but where Sigma excels is in their use of hops in their more inventive styles.

Their Double IPA, “8/29/97” (a sly Terminator reference), is unexpectedly nuanced despite being aggressively hopped. It’s a strong beer (8.9% ABV) that boasts a character enhanced by the rare and odd flavor of the Sorachi Ace hops.

For example, one seasonal offering, Pearl’s Essence, is a hopped Saison brewed with roasted tomatillos.

Blending food into the brewing process is a risky endeavor but Sigma nails it by producing a beer that doesn’t smack you in the face with tomatillos and instead boasts a surprisingly interesting and unique flavor profile not found elsewhere in Houston.

While Sigma Brewery doesn’t emphasize seasonal beers, they are kept plenty busy brewing up beers and ideas alike that push the boundaries of eclectic.

As part of their first anniversary, they’ve been hard at work brewing beers aged in brandy and whiskey barrels that see ABV content climbing as high as a staggering 15%. Further down the line, you might find beers in the works that utilize Vietnamese cinnamon and pretty much anything else that head brewer Nick Sorenson can get his hands on.

The Sum of Sigma

Sorenson’s passion for the brewing process pumps life into Sigma and it’s only been realized after he and his high school friend Peterson, made difficult decisions to pursue this dream.

After parting ways that found Matt in the oil and gas industry, Nick headed west to California and began a visual effects career in the film industry. While visiting the west coast breweries, Nick had an epiphany upon seeing the lush environments at Stone Brewing, one of the leading craft breweries in the country. W

hen the pair compared that experience to that of the then-sparse Saint Arnold’s digs at the original location, they began to see the possibilities of the taproom experience.

From there, they left their careers behind, reunited in Houston, and put years of hard work to get the right equipment and the right recipes to open a brewery that they describe as “a place where we would want to drink beer”.

Since September 2016, Sigma have opened their doors to the local Second Ward community and greater Houston. Whether it’s a cult movie night hosted by nearby book and record store, Wired Up, or a group of “comedy wrestling” athletes from Doomsday training in an unmissable ring in the warehouse, Sigma has woven itself into the East End.

This is a brewery built on passion and traces of that can be found around their taproom, in their beers, and in the faces of the people from nearby local businesses that make Sigma a place to unwind after putting in their own hard work.

Aside from Thursday run clubs and a bike ride on the second Saturday of each month, Sigma doesn’t keep a regular rotation of gatherings. Keep an eye on their Facebook page as they sometimes announce new events that are as eclectic as their beers.

The bar doesn’t serve a food menu, but food trucks do drop by on occasion and outside food is welcome (Sigma recommends Moon Tower Inn, just five blocks away).

Just three blocks away from the Coffee Plant stop on the Green and Purple light rail lines, Sigma is a friendly option for a pre-game stop before Rockets, Astros, and Dynamo games.

This is a dog friendly brewery, allowing pups on their outdoor patio and in the warehouse, when it’s open.

Looking for more great craft brewery options in Greater Houston? Check out our definitive guide to Houston Breweries inside the Loop and in neighboring communities like Conroe, Kay, Pearland, Galveston, and beyond.

Where to Celebrate Sunday Funday in Houston: EaDo