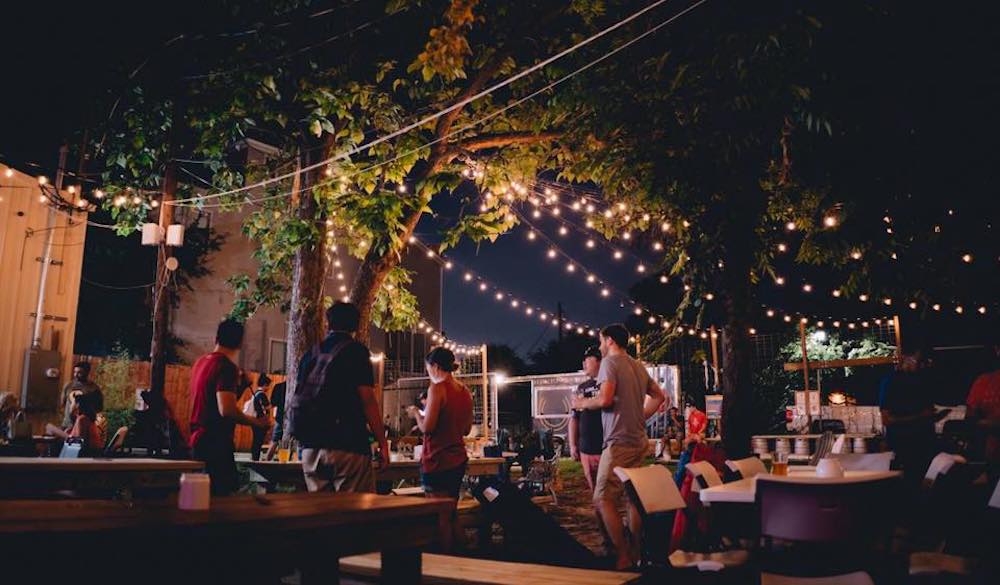 Raise a pint at Houston’s backyard brewery hidden in plain sight at Under the Radar Brewery in Midtown.

Houston locals might turn to Midtown when searching for some of the city’s tastiest dinners and pulsing nightclubs, but the district probably isn’t the first to come to mind when seeking out a brewery.

However, those calibrated to the beer scene know that Midtown has a secret.

Tucked away near the corner of West Alabama and Almeda Road is an unassuming but inviting yard that, true to its name, may go unnoticed. It’s here that the spotlight shines on Under the Radar Brewery.

In a formerly dormant overgrown lot, Under the Radar’s founders planted a taproom a beer garden. Ned Davis, Herb Garcia, and Mike Norfleet created a space that feels more like a friend’s backyard barbecue than the structured or industrial spaces of some of Houston’s larger breweries.

Stop by and you’ll find rows of picnic tables dotting the lawn under the shade of trees and tented canopies alongside an assortment of lawn games.

Deutcher Fleichwagen, a German food truck, offers up its fares at the brewery regularly while outside food (say, from Luigi’s Pizzeria a block away next to Axelrad) is also welcomed inside the lawn.

The small but mighty brewery offers more than a great hangout environment, though. Already pumping out brews for more than 60 Houston-area restaurants and bars, Under the Radar serves up several offerings on tap.

You can try any of their pints for $5, but $15 gets you a souvenir pint glass along with three tokens to exchange for any beer of your choice.

If that decision feels a bit difficult, then opt for a $10 flight of five of their beers. We can get you started on your flight with these suggestions:

At Under the Radar, you can’t go wrong with any of their selections because key to enjoying your experience is to be surrounded by a community of friends, whether you bring them or meet them there.

Those communal vibes have been cultivated over the years as the brewery spawned from the early homebrewing trials of founder Ned Davis.

As Davis began to tool around with the brewing process, he’d share his efforts with friends at Houston Dynamo tailgates outside of the once-standing Robertson Stadium. His original homebrewing system even adorns the side of the taproom, where it’s now used as a piloting system for test batches.

Bringing in his friends Garcia and Norfleet, the trio nailed the brewery’s moniker, Under the Radar, and found a spot to call home in Midtown.

The tailgate vibes remain at the brewery’s lawn, where Under the Radar hosts several weekly events (even known once or twice to pack the yard with as many as 600 people).

In a neighborhood where townhomes rub shoulders against one another, sacrificing backyards and communal areas, Under the Radar provides a space to share with your compatriots and enjoy the crisp taste of their beers dancing on the tip of your tongue.

Under the Radar’s success in drawing crowds means room for expansion on the horizon.

The recent addition of their first ever seasonal drafts to the taproom is a milestone and the potential for canning in the future means that guests may one day be able to bring beers for their very own tailgates around town.

Under the Radar is pet and family friendly so all are invited to the brewery’s lawn.

Trivia nights can be the busiest nights on Wednesdays so if you spy a Game of Thrones or The Office night coming up, be prepared for long lines at the taps.

You can buy shirts and swag but, for now, there isn’t any beer that you can bring home. That may change in the future, however, as Under the Radar aims to open canning production in the months ahead.

Under the Radar Brewery in Midtown