Home Destinations + Landmarks Bring your 4-legged friend to the Park for Humans & Dogs in... 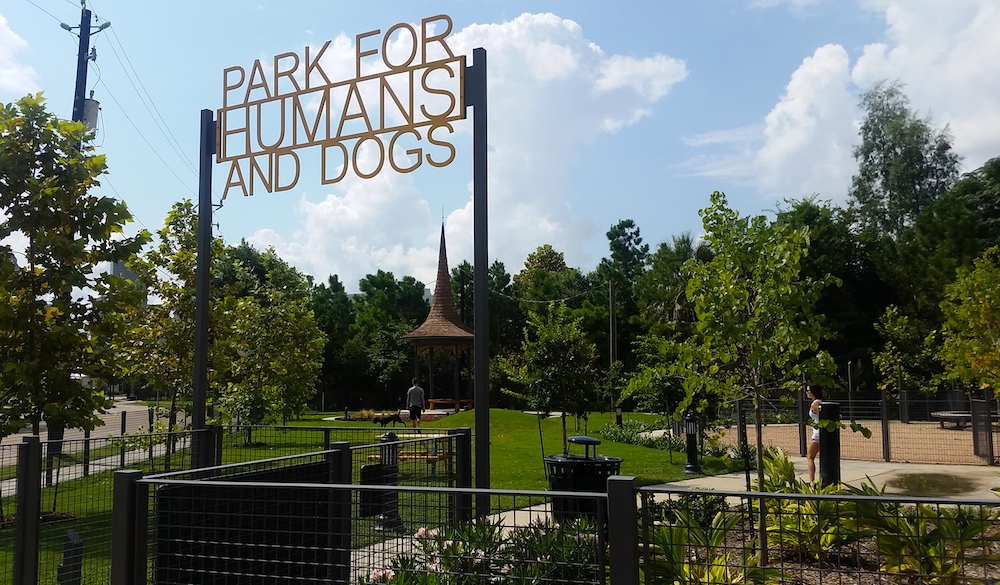 Play fetch with man’s best friend or enjoy the outdoors all to yourself in a quaint green space at the Park for Humans and Dogs.

Located in the Old Sixth Ward at the intersection of Washington Avenue and Sawyer Street, the almost hidden Park for Humans and Dogs doubles as both a green space for the surrounding community as well as a play area for their dogs.

In an area known for its bustling bar and arts scene, the park offers dog-owners and pedestrians a moment to collect their thoughts in what is typically a hectic area.

Take refuge from the noise in the green spaces which feature a re-purposed gazebo, a convenient “do your business” gravel area for rover (separate from the grassy areas), and water features –including misters to cool off in the heat, as well as dog fountains and showers.

The park even taps into the mantra of the Washington Avenue Arts District with a sensitivity to historic preservation by way of including a 100-year-old restored cupola from a neighborhood Victorian house that has been re-purposed into a gazebo.

Owners should note that dogs are required to be leashed when not in the designated play areas.

The leash law is one of the tools that permit dogs and dog owners to visit a park without creating safety concerns, disturbing natural resources or diminishing a park visit for those who are not comfortable around dogs.

The park is open to the public daily from 5am to 10pm with free, but limited parking available nearby.

Presented courtesy of TIRZ 13, the purpose of the Park for Humans and Dogs and other TIRZ 13 initiatives is to make improvements to the historic Old Sixth Ward neighborhood and to encourage the development of affordable residential housing projects through public improvement projects.

The Park for Humans & Dogs

Where to Happy Hour in the Washington Corridor

Houston Nightlife: The Best Bars in the Washington Corridor

Where to Brunch in Washington Corridor & Memorial Park

See the house that beer built in Rice Military