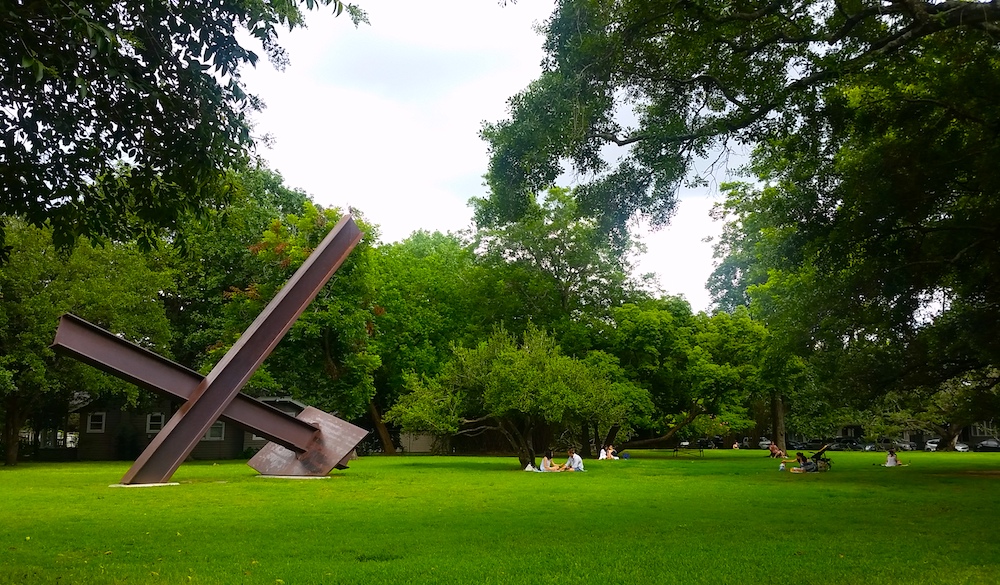 In our Park Spotlight series, we take a closer look at Houston’s vast array of public recreational areas to shine a light on hidden and not so hidden gems. This week we’ll be spotlighting Menil Park. Join us as we take a trip through Houston, park by park.

Located in Montrose at the intersection of West Alabama and Mandell Street, Menil Park sits quaintly tucked away within the 30-acre Menil Collection museum campus just west of the University of St. Thomas.

Opened in conjunction with the Menil Collection in 1987, the park adds to this free-to-attend museum’s tranquil vibe with its shaded oak trees and gray residential/arts organization bungalows that allow visitors to get away from the hustle and bustle of the city, while never leaving it.

Featuring major works by artists Michael Heizer, Max Neuhaus, and Mark di Suvero installed on the park and campus lawns, this urban oasis within the city invites visitors to ponder the outdoor sculptures that contribute to the aesthetic of the campus.

Though smaller in size, a huge idea hangs from an oak tree in the center of the park. Created as an “urban intervention” by a University of Texas architecture student, a simple swing set installed by the globe-spanning Red Swing Project asks visitors to think more about what a simple act of play invites to underutilized public spaces.

In addition to the ample green space for adults, children, and pups, guests will find plenty of inspiration from the museum and its surrounding satellite arts buildings.

Featuring a world of art from the prehistoric to the present day, the Menil Collection main building sits directly next to the park and exhibits paintings, sculptures, works on paper, photographs and more in naturally-lit galleries.

East of the park next to St. Thomas University sits the world-renowned Rothko Chapel. Inspired by the work of Russian-born American painter Mark Rothko, the sacred space (open to all people) welcomes more than 80,000 visitors each year.

Adjacent to the main museum, the eponymous Cy Twombly Gallery houses in a literal box the both ancient and modern work of an artist that defies being put into a metaphorical box.

Not satisfied yet? Check out the Byzantine Fresco Chapel located at the corner of Branard and Yupon Street for an experimental series of year-long, site-specific contemporary art installations. Click here for a map of the surrounding Menil Campus.

Though the park is generally lax and open daily to the public from dawn to dusk, guests should note that glass containers, loud music, and climbing on the sculptures are strictly prohibited.

It would also be easy to make the mistake so it’s worth it to mention that animals are not allowed to be unleashed and owners are asked to pick up after their pets.

If you work up an appetite strolling the park, Bistro Menil offers European-inspired, American fare paired with wines by the glass or bottle and craft beer directly across the street from the Menil Collection’s main building’s entrance at Sul Ross Street.

Open Wednesday to Sunday, guests can dine on a delicious chef-crafted menu by Chef Greg Martin who aims to reclaim the definition of a classic bistro by providing casual dining in a wine-centric and friendly establishment.