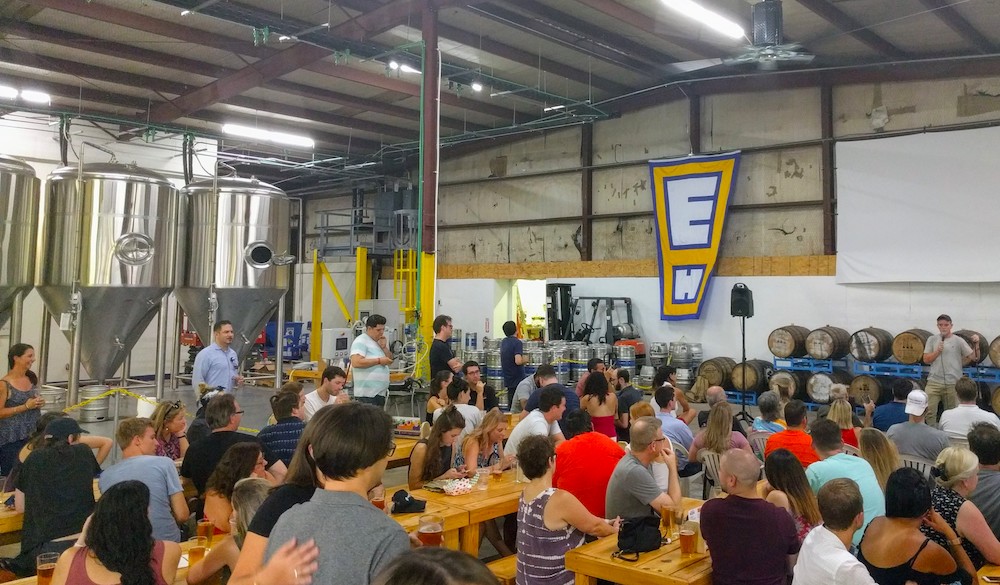 Raise a pint, toast your neighbors, and cry “I found it!” at the upstart Eureka Heights Brew Co. on 18th Street in The Heights.

Picture this: you’ve spent an afternoon ducking in and out of the antique shops, boutique clothing stores, and bins of records on 19th Street in The Heights.

Most days of the year, it’s probably quite hot outside and you’re breaking a sweat, ready to reach for a cold and refreshing drink to break the heat. Where do you go?

Drop a block down to 18th Street and drive a few minutes west and you’ll find that tasty brew at Eureka Heights Brew Co.

Stop by and you’ll find rows of tables next to the taproom bar, serving several of their draft offerings. Head past the taps and find more seating wedged between the towering fermenters and an assortment of games from big-block Jenga to Harlem Globetrotters pinball and foosball.

For those with pups, a sizeable section of the parking lot out front is roped off with access to one of the many local food trucks that swing by regularly.

Eureka Heights is meant to be as laid back and chill as the beers they serve up, with sufficient space to enjoy them.

By design, most of their beers are brewed to be “session” beers–drinks with a low alcohol content (around 4-5% ABV) so you can tuck away multiple pints without feeling too devastated the following day. In other words, you won’t find too many barleywines but you will discover a wide selection of crisp, refreshing, and flavorful beers.

Amongst those beers, here are a few winners that we liked:

Eureka Heights also offers more adventurous beer, like the Moo Caliente stout that is brewed to be creamy but spiced with cinnamon, chocolate, and cayenne pepper that linger in your mouth.

Alongside these taps, you’ll also find seasonal brews for tasting but be warned the ABV is likely higher than their year-rounds.

Most pints run either $5 or $6 and the brewery has begun serving flights for $10, offering you a chance to make your way through several of their drafts at once. For $10 to $12, you can also fill a 32oz “crowler” that is sealed for the drive home.

Open since the fall of 2016, Eureka Heights is still in the early phase of their brewery with plans for expansion if all goes well in the future.

It’s quite an achievement when considering their humble homebrewing beginnings, forged by the friendships of brewery founders Casey and Lori Motes, Rob and Shelley Eichenlaub, and Joel and Heather Swift.

These six have combined their brewing and entrepreneurial talents to continue crafting delicious beers but now in a sizable setting that is inviting and accommodating for the large crowds that roll through on the weekends.

Eureka Heights maintains a steady stream of events to keep those crowds coming, too.

From run clubs and yoga on Thursdays, to hosting comedy showcases, boardgame nights, and popular Houston food trucks, there’s always something going on at the brewery on any given week.

Its friendly event booking terms make for a schedule of diverse events that help attract enthusiasts from all over town.

Many breweries around town have parking woes but not at Eureka Heights where they join their brewery with an equally-spacious lot next door.

Keeping up with the variety of events hosted at Eureka Heights can be tricky but keeping an eye on social media throughout the week will help make sure you’re in the know about pop-ups and trivia nights.

The taproom is only separated by a chain rope from the active brewery so tours aren’t very common. If you still want to check out their brewing process, reach out to the enthusiastic crew to set up a private tour.

“Zicke, zacke” at the first ever Oktoberfest at Sugar Land Town...