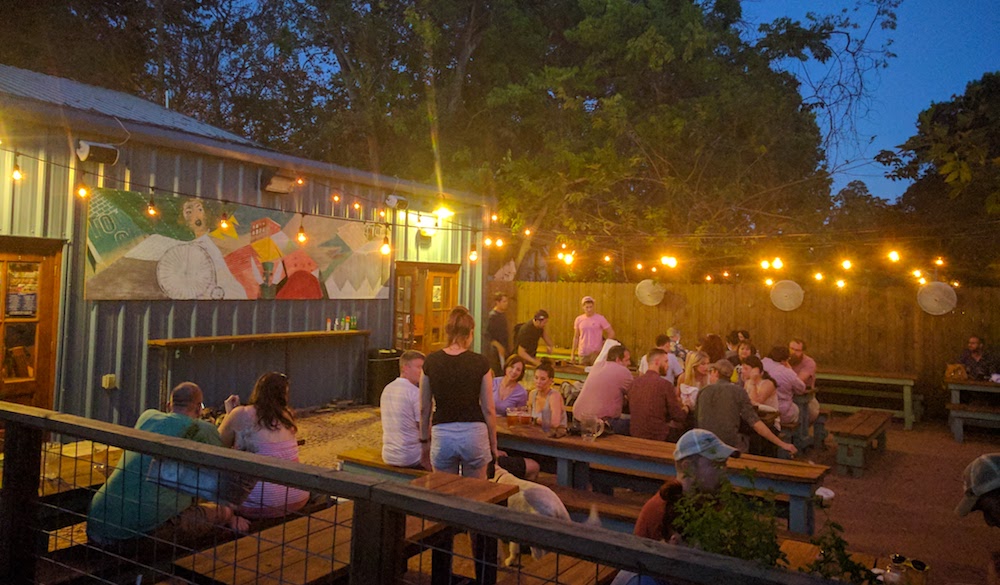 Update 5/27/19: Town in City Brewing has ceased operating at this location. The owners have stated that they will reopen at a new location in Houston at some point.

Say cheers to delicious local beers at Town in City Brewing Company in the heart of The Heights with our Brewery Spotlight series.

Despite having the fourth-largest number of people that call it home, Houston’s sprawling environment is still chock-full of nooks and hideouts in the hundreds where gems can be found.

Set in the historic Heights neighborhood, there is one such place tucked away near the corner of Studewood and Cavalcade Street. Be careful not to miss the building wedged between residences or else you risk missing the aptly named Town in City Brewing Company.

Spending your time at Town in City is less about seeing how the beers are made (as it can be in other breweries) and more about enjoying a finely-crafted beer with friends as well as those from the community that it represents.

Like a visit to the hometown bar you used to haunt, there in the Heights you’ll find a brewery with a taproom that feels distinctly neighborly.

The taps on the far side of the wall offer up beers that reflect Town in City’s enthusiasm for the brewing process and their eye for experimentation.

The spaces in and outside the taproom bring their visitors close together, emphasizing the small-feel community within one of the country’s largest cities.

Pull up to the bar and find samplings of their beers in all sorts of sizes for incredibly friendly prices.

Beer flights are also available and offer a great opportunity to try several of their year-round and rotational drinks. Here are a few recommendations:

Timing your visit right means getting a chance to taste these small batch productions in their taproom.

The outdoor patio is dog-friendly and makes a great place to hang out during one of the brewery’s trivia or bingo weeknights.

Unlike other breweries, there are no token exchanges and no public brewery tours. Like a bar, you pay for the beer you want and prices make this some of the cheapest craft beer in Houston.

For those in need of a fix outside of beer suds, sodas and Black Hole cold brewed coffee are also available for purchase.

About Town in City Brewing Company

The Town in City venture dates back to a friendship between founders Steve Macalello and Justin Engle from their grad school days in Colorado, where they began home-brewing together.

After graduating and reuniting in Houston around 2010, the pair continued to homebrew before realizing their dream of opening a brewery.

Setting out to create “honestly crafted ales and lagers”, the pair hone in on the fine details of their beers with a focus on executing a brewing process full of subtleties.

Fast-forward and you’ll find that the brewery is up and running smoothly, serving guests as their neighborhood bar.

Events at the Brewery

In a city that is bursting with brewery possibilities, Town in City remains one of the few that offers a more intimate and neighborly atmosphere.

Events set throughout the week invite this type of camaraderie that Town in City has become known for and keep a steady stream of visitors at the taps as well as the outdoor beer garden.

Drop by on a Wednesday night for trivia, Thursday bingo nights, or, for the more athletically-inclined, a Friday night running club (and a soon-to-debut cycling group) –all of which help bring together beer enthusiasts from around the city.

And for those that know their Cascade hops from their Willamettes, Town in City has a special program for you.

The “Townie” membership program brings together craft connoisseurs in monthly meetings to test out experimental batches, develop taste pallets, and discuss the process of brewing beer.

Annual memberships run about $216 and include access to meetings, private events, and free beer vouchers.

Space is limited, however, but for the beer lover that has a serious passion, the Townie Membership Program would be a great club to call yourself a member.