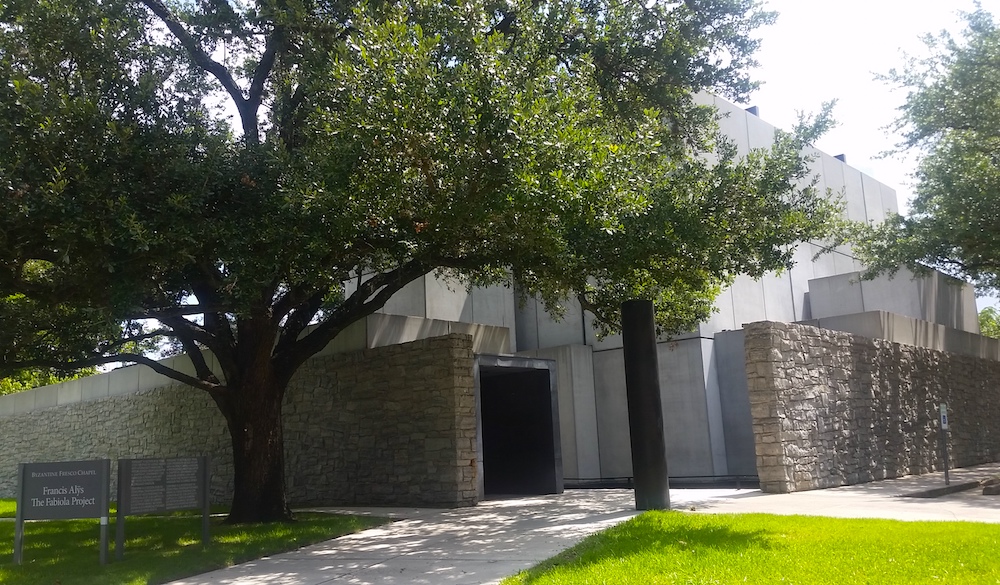 Lose yourself in a surreal series of year-long, site-specific contemporary art installations at the Byzantine Fresco Chapel.

Located within the 30-acre Menil Collection museum campus, the Byzantine Fresco Chapel sits quietly tucked away at the corner of Branard and Yupon Street in Montrose.

Originally opened in 1997, the Byzantine Fresco Chapel was designed by architect Francois de Menil to house an installation of two 13th Century Christian frescoes from Cyprus that were on loan.

As of 2015, the former site for the frescoes has been repurposed to house an experimental series of long-term art installations.

At the heart of the museum’s mission with the project is the belief that art and spirituality are great forces in our society and central to our shared experiences.

History of the Byzantine Fresco Chapel

Presented with the opportunity to purchase dismantled frescoes dating to the 13th century, Dominique de Menil, founder of the Menil Collection, was able to conclude that the frescoes had been stolen from a chapel near Lysi in the Turkish-occupied section of Cyprus, cut into 38 pieces, and shipped by thieves to sell in the arts black-market.

After 15 years of being on view in Houston, the agreement between the Menil and the Church of Cyprus concluded in 2012 with the returning of the frescoes to Cyprus.

To date, the Menil Collection has breathed new life into the unoccupied chapel, which joins the Cy Twombly Gallery and the Dan Flavin Installation at Richmond Hall as freestanding satellite buildings dedicated to modern and contemporary art in Menil’s 30-acre art neighborhood.