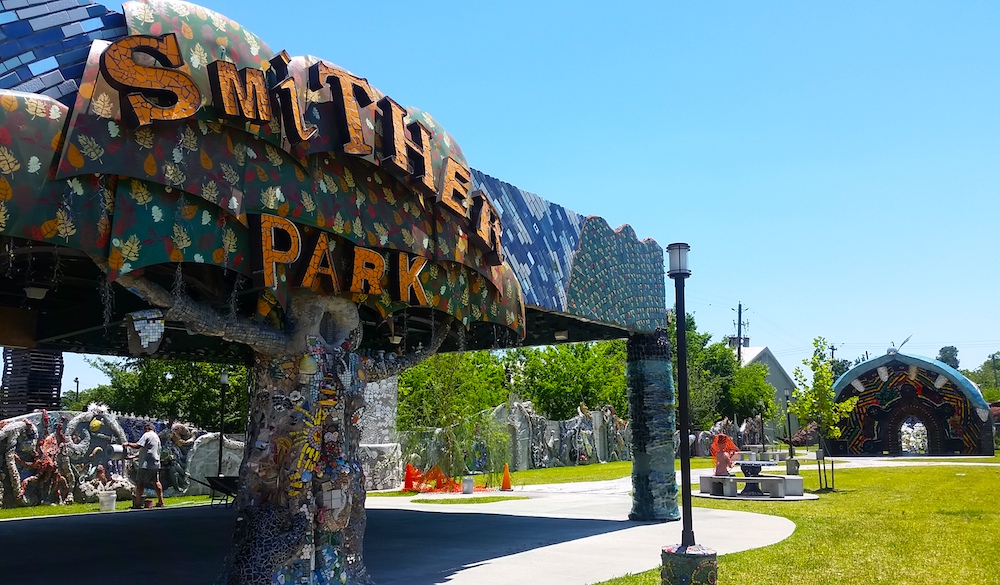 In our Park Spotlight series, we take a closer look at Houston’s vast array of public recreational areas to shine a light on hidden and not so hidden gems. This week we’ll be spotlighting Smither Park. Join us as we take a trip through Houston, park by park.

Located in the historic East End on Munger Street, Smither Park is the first-of-its-kind in Houston. The folk art-inspired green space was conceive to advance the artistic spirit of Jeff McKissack who created the neighboring Orange Show Monument.

The three-dimensional mosaic creations are feature fanciful scenes, including mirrored armadillos and cats canoeing, along with celebrations of loved ones lost.

Visitors exploring the intricate creations will find concrete walls, repurposed and given three-dimensional shapes, covered in mosaic tiles, and just about every common trinket or found object you could imagine.

Living Mosaics in an Ever-Evolving Park

Although the intricate work has progressed considerably since our first story in 2014, a visit to Smither Park reveals there’s still work to be done. Most Saturdays, you will find local artists adding to the wall, under the direction of the park’s artistic designer Dan Phillips.

When complete, the Memory Wall will feature 60 distinct panels designed by local artists and individuals, many featuring items that represent (or once belonged to) their loved ones or to Smither Park donors.

Inspired by the Orange Show’s philosophy on advancing self-taught art, this work-in-progress park serves as a testimony to Houston’s vibrancy and variety with most every feature intricately decorated by artists working with recycled and found materials.

Located in a small residential neighborhood just off the Gulf Freeway near Telephone Road, the park is easy to miss once you take the south exit.

Visitors should note that Munger will be the third residential street on your right when exiting southbound I-45 (well before you reach the light at Telephone Road).

Although more than 3/4 of the wall has been completed, some stretches of the wall and other features of the park are still undergoing construction.

On the one hand, this gives visitors a great opportunity to inspect and understand how the wall itself is being made but parents should note that, at times, building materials and tools are liable to clutter parts of the park under development.

The development of Smither Park was long in coming, first realized at its ground-breaking on February 8, 2011.

Designed by folk artist Dan Phillips, the park was named for late Houston lawyer and Orange Show board member John H. Smither who passed away in 2002.

The project has been championed by his widow Stephanie Smither and the Orange Show Monument, which also puts on the annual Houston Art Car Parade and manages the Beer Can House created by John Milkovisch in Rice Military.

About The Orange Show Monument

Created entirely late Houston postman Jefferson Davis McKissack, The Orange Show Monument, which sits directly next to Smither Park, chronicles the strange story of its creator and his affinity for a certain favorite fruit.

From 1956 to 1979, McKissack worked in isolation, building out his vision with common construction materials and found objects. In addition to the original paint job, McKissack placed each item and mosaic tile by hand.

His completed work transformed the East End lot on Munger Street, making it a sometimes charming, sometimes baffling mosaic-filled 3,000-square foot ode to oranges and minerals from the sea.

Where to Shop in the East End

Where to Brunch in the East End