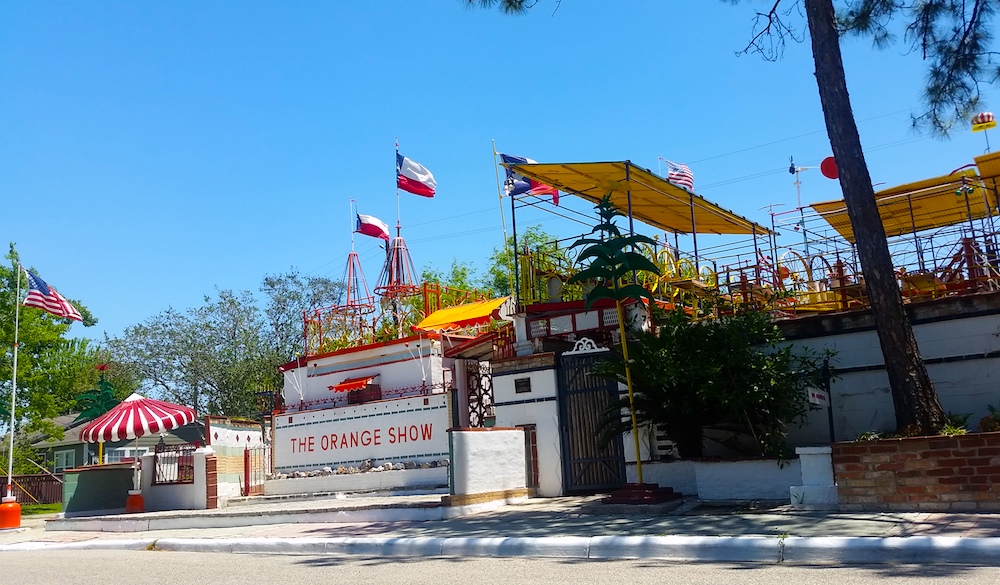 Get lost in a folk art maze of quirky walkways, vibrant mosaics, and an unusual vision at The Orange Show Center for Visionary Art in Houston’s historic East End.

Created entirely late Houston postman Jefferson Davis McKissack, The Orange Show monument chronicles the strange story of its creator, his affinity for a certain favorite fruit, and a firm belief that longevity results from hard work and good nutrition.

From 1956 to 1979, McKissack worked in isolation, building out his vision with common construction materials and found objects. In addition to the original paint job, McKissack placed each item and mosiac tile by hand.

His completed work transformed the East End lot on Munger Street, making it a sometimes charming, sometimes baffling 3,000-square foot ode to oranges and minerals from the sea.

The striking monument is filled with offbeat mosaics, brightly painted figures, balconies, mini-arenas, corners to explore, and a slew of modest exhibits that make for unusual photo-ops.

McKissack called his work “the most beautiful show on earth” and estimated that 90 percent of the country’s population would visit once it was complete.

When crowds failed to materialize after its 1979 grand opening, neighbors observed that McKissack withdrew into himself. Sadly, he passed shortly thereafter.

But was not to be forgotten.

Considered to be Houston’s hub of folk art activity, The Orange Show site is a living example of how individual vision can dramatically enrich community and culture. Today, it is a beloved location institution and boasts nationally respected programs throughout the year.

After McKissack’s passing in 1980, Houston arts patron Marilyn Oshman formed a non-profit foundation to preserve The Orange Show. In 1982, the restored site opened and began to integrate The Orange Show into Houston’s cultural life through a wide variety of programs.

Today’s programming focuses on the example set by The Orange Show; art is tangible and accessible to all. The organization provides outreach programs that encourage the public to participate in the creative process.

The most beloved of these activities is the Art Car Parade & Weekend which attracts more than 250 rolling works of art annually; the Beer Can House which Ripley’s Believe It or Not estimated to contain more than 50,000 cans; and the work-in-progress Smither Park, a mosaic-filled creative urban space that has developed with the help of more than 300 artists.

One of Houston’s Most Unusual Curiosities

Like most formal and informal art installations in Houston, The Orange Show has its own set of passionate defenders and puzzled critics.

What visitors have to look forward to is a unique-to-Houston experience built by a man whose imagination was unfettered by typical rules of rationale.

Where you yourself, and others with you, stand on the spectrum is entirely a matter of taste, story, and opinion.

What’s irrefutable is that McKissack’s vision has made a lasting impact on Houston’s culture and community.

Located at 2401 Munger Street, in a small residential neighborhood just off the Gulf Freeway near Telephone Road, the monument and offices are easy to miss once you take the south exit. Visitors should note that Munger will be the third residential street on your right when exiting southbound I-45 (well before you reach the light at Telephone Road).

Admission, which can be purchased at the offices across the street from the Orange Show monument, is $5 for adults and children aged 12 and older. Admission is free for children aged 12 and under. Group tours, field trips, concerts, and other workshops are scheduled out of these hours and may require additional fees. Click here for a complete list of information.

Despite the vibrant colors and well-intended messaging, parents should note that the Orange Show was not built with safety in mind.

Please be advised it’s best to not leave children unattended as there are plenty of sharp edges and precarious steps throughout the monument.

While you’re in the area take a stroll down the block to check out Houston’s first folk art-inspired green space at Smither Park.

Built near The Orange Show, the mosaic-covered park features an amphitheater, pavilion, meditation garden, and a 400-foot memory wall.

Inspired by the Orange Show’s philosophy on advancing self-taught art, the work-in-progress park serves as a testimony to Houston’s vibrancy and variety. During most sunny weekend afternoons, expect to find artists continually adding to their mosaics along the colorful and impressive memory walls.

5 Must Do Things in the East End