Home Kids + Families Current Kid + Family Activities Put your heart on display at Houston’s I Love You Wall in... 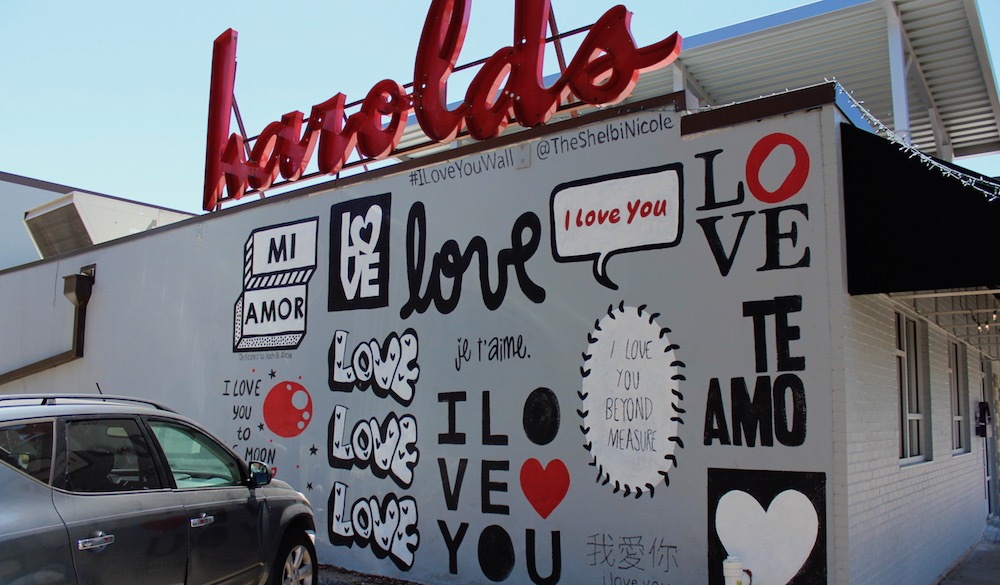 Strike a pose in front of your favorite message of love at the I Love You Wall mural on the eastern side of Harold’s Restaurant, Tap Room and Terrace in The Heights.

Houston artist Shelbi Nicole designed and created Houston’s heart-laden mural at the behest of Houstonian Josh Atkinson, who wanted to create the perfect spot to propose to his girlfriend Alicia Campos.

A resident of Nicaragua, Campos constantly commented on Houston’s striking and abdundant street art whenever she visited Josh. In 2016, he spilled his elaborate engagement plan to Houston realtor Sarah Perez at a gala, and she promptly put Josh in touch with Shelbi.

Designing Houston’s I Love You Wall

Based on Josh’s vision, Shelbi created a love-themed mural design that both fit his aims and wasn’t necessarily devoted only to their proposal. Both Josh and Shelbi wanted the design to be something accessible to other Houstonians and visitors. They knew it’d be up for a long time, and intended it to be somewhat neutral in its celebration of love.

“We wanted to be sure people could find many uses for it, not just marriage proposals,” said Shelbi. “We wanted to create a positive message.”

Once the design was finalized, Shelbi reached out to a few local businesses. Alli Jarrett, owner of Harold’s Restaurant, Tap Room and Terrance, enthusiastically agreed.

“I met Josh and Alicia and a group of their friends and drove them around, showing them multiple murals and giving the backstory and artist name for each,” explained Shelbi. “It seemed legit.”

The tour concluded at Harold’s in The Heights, where Shelbi purposely pulled up to the back of the building and led the group to the mural. Once there, she declared, “This is my newest mural that I actually painted for you.”

At that point Josh took over and proposed. Alicia was shocked, but quickly answered yes.

The group then went into Harold’s, where more than 30 of their friends were waiting to surprise her and celebrate.

“It was magical,” said Shelbi. “So romantic.”

As an ambassador of the Greater Houston Partnership’s #TeamHouston campaign, Shelbi wanted to showcase the city’s diversity. So she was sure to incorporate “I love you” in Chinese, Spanish, Vietnamese, and French.

“The point was to showcase love as a universal language in Houston,” said Shelbi, “the most diverse city in the U.S.”

Visiting the I Love You Wall

The wall itself faces Harold’s parking lot. So if you’re looking for a full photo, unobstructed by parked cars, you’ll want to visit during off peak hours.

Your best bet is on weekday mornings before or at 10am. Plus you get the benefit of the soft lighting from the sun in the east. But if you’re patient, and you’re willing to wait, you can usually find a clearing of the two to three spots on most days.

The restaurant is closed on Mondays, which may increase your odds. Although the free parking lot is still used to visit neighboring shops, businesses, and locations.

Depending on where you stand, and how you frame your photos, there are many opportunities to pose in front the entire wall or zoom into your favorite declaration of love.

If you’re posting your photos on social media, and want a little extra attention, be sure to use #ILoveYouWall and tag the artist @TheShelbiNicole.

I Love You Wall at Harold’s in The Heights

Take yourself out to the ballgame with deals, giveaways & more...