Join Project Row Houses in celebrating the life of “The Flower Man” at Flower Man Day on Saturday, February 7, 2015. 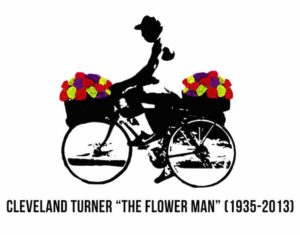 Celebrate the life and work of Cleveland Turner – known in the Houston community as “The Flower Man” – by participating in a day of activities dedicated to his memory and in celebration of his former home. During his life, his residence was a living piece of African American yard-art. Now its deteriorated condition requires it to  be torn down.

Arrive at First St. Matthew’s Missionary Baptist Church, Turner’s place of worship, at 10am for a Second Line with horn-driven band Free Radicals from the church to Turner’s home at 2305 Francis Street.

The demolition of Turner’s home – which was unavoidable due to a toxic mold infestation – will take place at 11:15am.

Following the demo, guests will be invited to participate in crafts, hear stories from the community, listen to a performance from vocalist Lisa Harris and ride in or walk alongside a community bike ride.

About the Flower Man

Cleveland Turner turned his home at 2305 Francis Street in the Third Ward into a living work of art. It has been recognized as one of the best examples of African American yard-art in the United States and his sculptures themselves gained international recognition. He acquired the name Flower Man for his bicycle decorated with silk flowers.

“Although Cleveland gained much notoriety for his artwork, his greatest talent was his ability to inspire others and help them bloom like the flowers he loved. He contributed much to each community he lived in, and he will always be thought of fondly for his smiling face, his wisdom, and his optimism,” read a statement released by Project Row Houses.

5 Must Do Things in Third Ward

Groove to the swampy blues of Tab Benoit in concert at...