Spend a Sunday afternoon strolling, skating, cycling, skateboarding, dancing or cartwheeling in the middle of the street with the Sunday Streets HTX pilot program on April 6, May 4 and June 1, 2014. 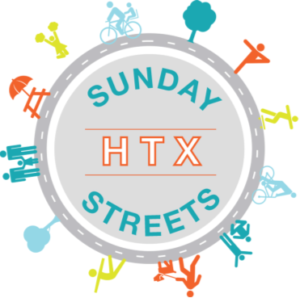 Sunday Streets HTX is a pilot program launched by Mayor Parker‘s office designed to promote health and community amongst Houstonians. For three months, on the first Sunday of the month, a different Inner Loop neighborhood street will be closed to vehicular traffic, giving free reign to pedestrians, cyclists, skaters and other self-propelled socializers.

With cars off the roads, Houstonians will literally be able to take to the street, exploring familiar environments from a whole new perspective while they visit local businesses or simply go for a neighborly family walk. Think of it as an impromptu neighborhood block party where the streets themselves become like a park for four hours on a Sunday Funday.

Streets included in the program are White Oak and Quitman in the Heights, Westheimer in Montrose and Washington Avenue to Market Square.

History of Sunday Streets and the Open Streets Program

Known as Ciclovía in Spanish, the Open Streets program saw its beginnings in Bogotá, Colombia, where select streets were closed to automobile traffic as early 1976.

Cycle into spring with Sunday Streets