Celebrate Star Wars Day with hundreds of your favorite friends and artists (and maybe a wookiee) with live music, cocktails and Star Wars-inspired fun at War’Hous Visual Studios on Saturday, May 4, 2013 from 7pm to 11pm.

Over the last few years, May 4 has gone from being a clever pun (“May the fourth be with you”), to a borderline bona fide holiday in many circles. Once again, Houston’s own visual artist and event curator Dandee Warhol has pulled together what is quite possibly the coolest and hippest Star Wars celebration in the country.

On Saturday evening, War’house Visual Studios becomes a “wretched hive of scum and villainy” for the second annual Star Wars Exhibition: War’Hous Strikes Back. More than 75 local and national artists will be displaying Star Wars and galactic inspired works (including the piece by Scotch Willington, pictured above).

Expect to see guests in Star Wars gear. You’re encouraged to wear your own, or dress up in full Star Wars regalia.

The Houston Star Wars Day event is open to all ages – though of course the bar is not. It’s going to be a big event, so be sure to register on the event’s Facebook event page if you’re planning to go. You’ll also find a growing list of artists who will be displaying their work and see some samples that they’ve posted.

Additional artists and vendors are being accepted through Thursday, May 2, 2013. Email [email protected] if you’ve got some R2-D2-inspired creations you’ve got to show the world.

The Force will be with you, always. 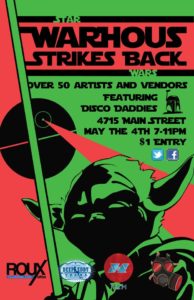 Jump to lightspeed at a free screening of Star Wars: The Force Awakens at Miller Outdoor Theatre

Laugh out loud, you will to a hilarious One-Man Star Wars Trilogy tribute in Galveston

Use the Force at the Houston Dynamo’s Star Wars Night